One morning last August a number of economists, engineers, Silicon Valley players, donors, and policymakers met on the UC-Berkeley campus to discuss frontier topics in measuring development outcomes. The idea behind the event was not that economists could ask experts to create measurement tools they need, but instead that measurement scientists could tell economists about what was going on at the frontier of measuring development-related outcomes.  One topic that generated a lot of excitement -- likely due to David Lobell's charm at the podium -- was the potential for a new crop of satellites to remote-sense (i.e. measure) important development outcomes.

Why satellite-based remote sensing?
The potential ability to use satellites to measure common development outcomes of interest excites researchers and practitioners for a number of reasons, chief among them the amount of time and money we typically have to spend to measure these outcomes the “traditional” way (e.g. conducting surveys of households or firms).  Instead of writing large grants, spending days traveling to remote field sites, hiring and training enumerators, and dealing with inevitable survey hiccups, what if instead you could sit at home in your pajamas and, with a few clicks of a mouse, download the data you needed to study the impacts of a particular program or intervention?

The vision of this “remote-sensing” based approach to research is clearly intoxicating, and is being bolstered by the vast amount of high-resolution satellite imagery that is now being acquired and made available.  The recent rise of “nano-“ or “micro”-satellite technology – basically, fleets of cheap, small satellites that image the earth in high temporal and spatial resolution, such as those being deployed by our partner Skybox – could hold particular promise for measuring the types of outcomes that development folks often care about.  This is perhaps most obviously true in agriculture, where unlike in the manufacturing sector, most production takes place outside.

How does it work?
For most agricultural crops – particularly the staple crops grown by African smallholders, such as maize – pretty much anyone can look at a field and see the basic difference between a healthy highly productive crop and low-yielding crop that is nutrient or moisture stressed.  One main clue is color: healthy vegetation reflects and absorbs different wavelengths of light than less-healthy vegetation, which is why leaves on healthy maize plants look deep green and leaves on stressed or dead plants look brown.  Sensors on satellites can also discern these differences in the visual wavelengths, but they also measure differences at other wavelengths, and this turns out to be particularly useful for agriculture.  Healthy vegetation, in turns out, absorbs light in the visible spectrum and reflects strongly in the near infrared (which the human eye can’t see), and simple ratios of reflectance at these two wavelengths form the basis of most satellite-based measures of vegetative vigor – e.g. the familiar Normalized Difference Vegetation Index, or NDVI.   High ratios basically tell you that you’re looking at plants with a lot of big, healthy leaves.

The trick is then to be able to map these satellite-derived vegetation indices into measures of crop yields.  There are two basic approaches (see David's nice review article for more detail).  The first combines satellite vegetation indicies with on-farm yield observations as collected from the typical household or agricultural surveys.  By regressing the “true” survey-based yield measure on the satellite-based vegetation index, you get an estimated relationship between the two that can then be applied to other agricultural plots that you observe in the satellite data but did not survey on the ground.  The second approach combines the satellite data with pre-existing estimates of the relationship between final yield and vegetative vigor under various growing conditions (often as derived from a crop simulation model, which you can think of as an agronomist’s version of a structural model). Applying satellite reflectance measures to these relationships can then be used to estimate yield on a given plot.  A nice feature of this second approach is that it is often straightforward to account for the role of other time-varying factors (e.g. weather) that also affect the relationship between vegetation and final yield.

How well does it work?
These approaches have mainly been applied to larger farm plots in the developed and developing world, at least in part because until very recently the available satellite imagery was generally too coarse to resolve the very small plot sizes (e.g. less than half an acre) common in much of Africa.  For instance, the resolution of the MODIS sensor is 250m x 250m, meaning one pixel would cover more than 15 one-acre plots. Nevertheless, these approaches have been shown to work surprisingly well on these larger fields.  Below are two plots, both again from David and co-author's work, showing the relationship between predicted and observed yields for wheat in Northern Mexico, and maize (aka “corn”, for Americans) in the US Great Plains.   Average plot sizes in both cases are > 20 hectares, equivalent to at least 50 one-acre plots. 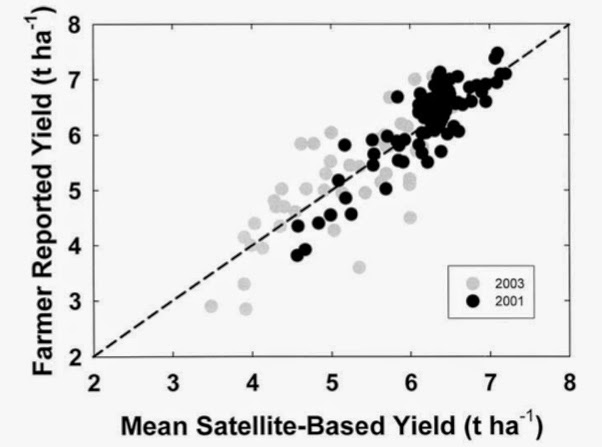 Although success is somewhat in the eyes of the beholder here, the fit between observed and satellite-predicted yields is pretty good in both of these cases, with overall R2s of 0.63 in the US case and 0.78 in the Mexico case.  And, at least in both of these cases, the “ground truth” yield data was not actually used to construct the yield prediction – i.e. they are using the second approach described above.  This was possible in this setting because these were crops and growing conditions for which scientists have a good mechanistic understanding of how final yield relates to vegetative vigor.

From rich to poor, big to small
Applying these approaches much of the developing world (e.g. smallholder plots in Africa) has been harder.  This is not only because of the much smaller plot sizes, and thus the difficulty (impossibility, often) of resolving them in existing satellite imagery, but also because of a lack of either (i) ground truth data to develop the satellite-based predictions, and/or (ii) a satisfactory mechanistic understanding in these environments of how to map yields to reflectance measures.

New data sources from both the ground and sky are starting to make this possible.  Sensors on the new micro-satellites mentioned above often have sub-meter resolutions, meaning smallholder plots are now visible from space (a half-acre plot would be covered by over 2000 pixels).  Furthermore, this imagery is being acquired often enough to ensure at least a few cloud-free images during the growing season -- not a small problem in the rainy tropics.

Working with David and some collaborators in Kenya, Uganda, and Rwanda, we are linking this new imagery with ground-based yield data we are collecting to understand whether the satellite data can capably predict yields on heterogeneous smallholder plots.  Below is a map of some of the smallholder maize fields we have mapped and are tracking in Western Kenya, as part of an ongoing experiment with smallholder farmers in the region.


Some of the long run goals of this work are to (i) allow researchers who have already have information on plot boundaries and crop choice to use satellite images to estimate yields, and (ii) to allow researchers who do not have plot boundaries but who are interested in broader-scale agricultural performance (eg. at the village or district level) a way to track yields at that scale. This work is ongoing, but given the experience in developed countries, we are hopeful.

Some challenges.
Nevertheless, there are clear challenges to making this approach work at scale, and clear limitations (at least in the near term) to what this technology can provide.   Here are a few of the main challenges:

Putting these difficulties together, should we just abandon this whole satellite thing?  We think not, for two reasons.  The first reason is that as we (hopefully) improve our ability to accurately measure smallholder yields from space, this ability would provide a clear compliment to existing surveys.  For instance, if yields are a primary outcome, imagine just being able to do a baseline survey (where field boundaries are mapped) and then measure your outcome at follow-up from the sky.  This will make an entire study both faster and cheaper, which should allow for larger sample sizes, which will in turn help deal with the measurement error issue above.

Second, we still have a surprisingly poor understanding of why some farms, and some farmers, appear to be so much more productive than others.  Is it the case that relatively time-invariant factors like soil type and farmer ability explain most of the observed variation, or are time-varying factors like weather more important?  Satellite data might be particularly useful for this question (David's review paper, and his earlier G-FEED post, gives some really nice examples), because you can assemble huge samples of farm plots that can then be easily followed over time.  Satellite data in this setting therefore might afford more power, and you can do it all in your pajamas.