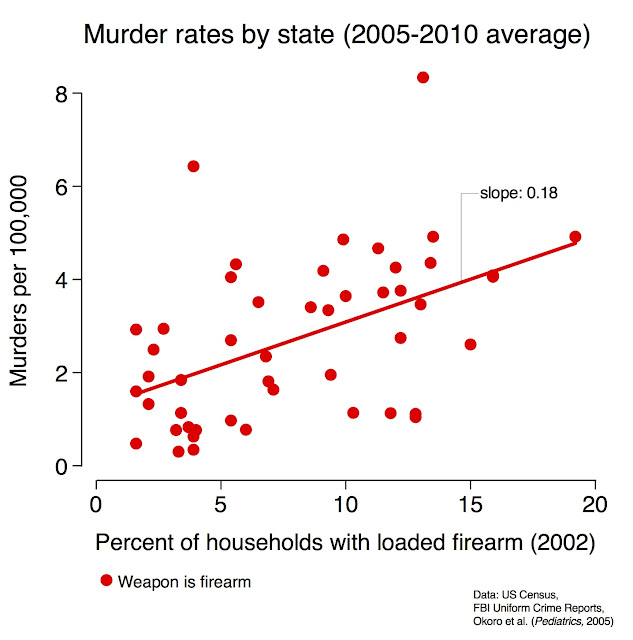 Basically, where people don't have guns, they don't kill with guns and instead kill using other weapons. In places where guns are widespread, they are a cheap technology and so they are used more relative to their substitutes.

The FBI data contains information on the weapon used in a homocide, so I just group together all non-gun technologies, which in the FBI data are coded as "knives or cutting instruments," "hands, fists, feet, etc," and "other weapons." When I plot these data (grey circles) I get: 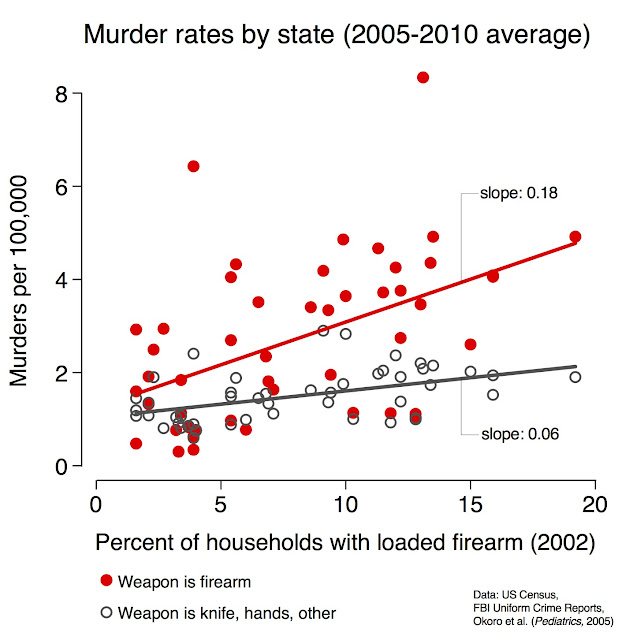 This is not the result we'd expect to see if "people kill people." The murder rate with non-gun technologies is almost totally unrelated to the presence of guns, and if anything it increases with gun ownership rather than decreases as we would expect if demand for murder were totally inelastic and people just swapped knives for guns seamlessly. This would suggest that "guns and knives are not really effective substitutes," implying that "guns probably kill people."

Now, this is correlational evidence, it's isn't a careful quasi-experimental study. There are alternative explanations that could explain this pattern.  First, demand for murder could simply be much higher in the states where people have more loaded firearms. This seems plausible, would be consistent with the non-gun murder pattern, but is hard to test. Second, people could have loaded firearms hanging around specifically because they are afraid of high murder rates (reverse causality). This "armament" hypothesis is a story that I think a lot of people tell, and it probably plays some role. But the association here is such that people have to be really afraid of murder in the sense that a small number of additional murders causes a lot of people to go out and purchase guns that they leave loaded in their house. The slope of the red line is 0.18, so in order for the armament story to make sense, if 0.002% more of the population were murdered this would have to cause roughly 10% more of the population to start leaving a loaded gun in their home.  This is possible, but my intuition is that people aren't quite that skittish.