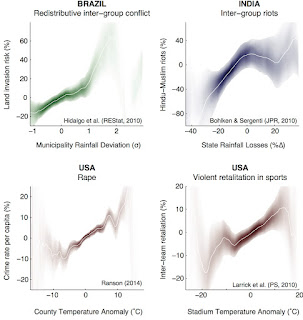 Thanks in large part to the authors of G-FEED, our knowledge of the link between climatic variables and rates of crime and conflict is extensive (e.g. see here and here). The wide-ranging effects of high temperatures on both interpersonal crimes and large-scale intergroup conflict have been carefully documented, and we’ve seen that precipitation shortfalls or surpluses can upend social stability in locations heavily dependent on agriculture. Variation in the El Niño cycle accounts for a significant share of global civil conflict, and typhoons lead to higher risks of property crime.

Much of the research in this area is motivated by the threat of anthropogenic climate change and the desire to incorporate empirically derived social damages of climate into policy tools, like integrated assessment models. Papers either explicitly make projections of conflict under various warming scenarios (e.g. Burke et al., 2009), or simply refer to future climate change as an impetus for study. While it’s valuable from a risk management perspective to understand and predict the effects that short-run climate variation may have on crime and conflict outcomes today, magnitudes of predicted climate changes and the lack of clear progress in climate policy generally place future projections at the heart of this body of work.

However, projections are also where much of the criticism of climate-conflict research lies. For example, see Frequently Heard Criticisms #1 and #6 in this post by Marshall. These criticisms are often reasonable, and important (unlike some other critiques you can read about in that same post). The degree to which impacts identified off of short-run climate variation can effectively predict future effects of long-run gradual climate change involves a lot of inherent (statistical and climatological) uncertainty and depends critically on likely rates of adaptation. Because the literature on adaptation is minimal and relies mostly on cross-sectional comparisons, we are limited in our ability to integrate findings into climate policy, which is often the motive for conducting research in the first place.

Recently, Sol, Marshall and I published (yet another) review of the climate and conflict literature, this time with an emphasis on adaptation and projection, to try to address the concerns discussed above. I’m going to skip the content you all know from their detailed and impressive previous reviews, and talk about the new points we chose to focus on.

Adam Sobel and I have a new paper on Potentially Extreme Population Displacement and Concentration in the Tropics Under Non-Extreme Warming.

The paper is a theoretical exercise making a simple point: tropical populations that migrate to maintain their temperature will generally have to move much further that their counterparts in middle latitudes. This results from well established atmospheric physics that aren't focused on by the researchers who usually think about climate change and migration. One reason this result is interesting is that, in a sense, the physics of the tropical atmosphere "amplify" the impact of warming (at least in this dimension) so that even small climate changes can produce really large population displacements in the tropics (theoretically). Here's the story...