A decade of advances in climate econometrics

I have a new working paper out reviewing various methods, models, and assumptions used in the econometrics literature to quantify the impact of climatic conditions on society.  My colleagues here on G-FEED have all made huge contributions, in terms of methodological innovations, and it was really interesting and satisfying to try and tie them all together.  The process of writing this was much more challenging than I expected, but rereading it makes me feel like we as a community really learned a lot during the last decade of research. Here's the abstract:

Abstract: Identifying the effect of climate on societies is central to understanding historical economic development, designing modern policies that react to climatic events, and managing future global climate change. Here, I review, synthesize, and interpret recent advances in methods used to measure effects of climate on social and economic outcomes. Because weather variation plays a large role in recent progress, I formalize the relationship between climate and weather from an econometric perspective and discuss their use as identifying variation, highlighting tradeoffs between key assumptions in different research designs and deriving conditions when weather variation exactly identifies the effects of climate. I then describe advances in recent years, such as parameterization of climate variables from a social perspective, nonlinear models with spatial and temporal displacement, characterizing uncertainty, measurement of adaptation, cross-study comparison, and use of empirical estimates to project the impact of future climate change. I conclude by discussing remaining methodological challenges.

And here are some highlights:


1. There is a fairly precise tradeoff in assumptions that are implied when using cross-sectional vs. panel data methods. When using cross-sectional techniques, one is making strong assumptions about the comparability of different units (the unit homogeneity assumption). When using panel based within-estimators to understand the effects of climate, this unit homogeneity assumption can be substantially relaxed but we require a new assumption (that I term the marginal treatment comparability assumption) in order to say anything substantive about the climate. This is the assumption that small changes in the distribution of weather events can be used to approximate the effects of small changes in the distribution of expected events (i.e. the climate).  In the paper, I discuss this tradeoff in formal terms and talk through techniques for considering when each assumption might be violated, as well as certain cases where one of the assumptions can be weakened.


2. The marginal treatment comparability assumption can be directly tested by filtering data at different frequencies and re-estimating panel models (this is intuition between the long-differences approach that David and Marshall have worked on). Basically, we can think of all panel data as superpositions of high and low-frequency data and we can see if relationships between climate variables and outcomes over time hold at these different frequencies.  If they do, this suggests that slow (e.g. climatic) and fast (e.g. weather) variations have similar marginal effects on outcomes, implying that marginal treatments are comparable.  Here's a figure where I demonstrate this idea by applying to US maize (since we already know what's going on here).  On the left are time series from an example county, Grand Traverse, when the data is filtered at various frequencies. On the right is the effect of temperature on maize using these different data sets.  The basic relationship recovered with annual data holds at all frequencies, changing substantially only in the true cross-section, which is the equivalent of frequency = 0 (this could be because that something happens in terms of adaptation at time scales longer than 33 yrs, or that the unit-homogeneity assumption fails for the cross-section). 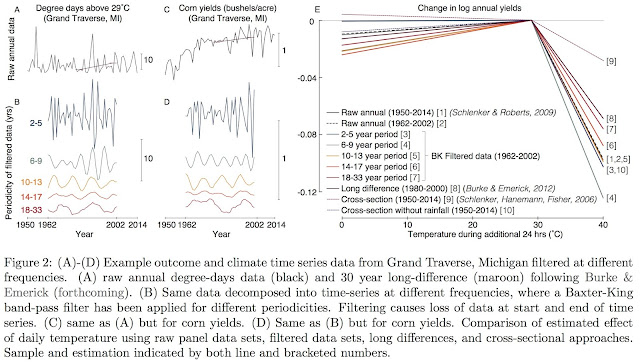 3. I derive a set of conditions when weather can exactly identify the effect of climate (these are sufficient, but not necessary).  I'm pretty sure this is the first time this has been done (and I'm also pretty sure I'll be taking heat for this over the next several months).  If it is true that
then by the Envelope Theorem the marginal effect of weather variation on Y is identical to the marginal effect of identically structured changes in climate (that "identically structured" idea is made precise in the paper, Mike discussed this general idea earlier). This means that even though "weather is not equal to climate," we still can have that "the effect of weather is equal to the effect of climate" (exactly satisfying the marginal treatment comparability assumption above). If we're careful about how we integrate these marginal effects, then we can use this result to construct estimated effects of non-marginal changes in climate (invoking the Gradient Theorem), which is often what we are after when we are thinking about future climate changes.

The Global Policy Lab at UC Berkeley is now hiring multiple positions for a major research project at the nexus of environmental resource management, economic development, and econometric modeling.

All job postings are open and applications will be under review immediately.