My colleague (and former postdoctoral mentor!), V. "Ram" Ramanathan and I have a paper out this week in PNAS (here) on the impacts of short-lived climate pollutants (SLCPs) on Indian crop yields over the past 30 years (1980-2010). Anticipating the publication, the G-FEED crew invited me to guest post this week. Thanks, guys! It's a fantastic opportunity to talk about the paper itself as well as what we know more generally about air pollution and agricultural impacts. I'm biased, but I think this topic is going to be increasingly important in the coming years. And it feels fitting to discuss it here, as G-FEEDers have been active contributors to understanding the relationship between air quality and crop yields: this work builds on some papers by Ram and Max (here and here), speaks to current work by Wolfram and co. on ozone impacts in the US, and benefitted from feedback from Marshall and David at various points.

First, some background. When we think about anthropogenic climate change, we've usually got carbon dioxide (CO2), and maybe methane (CH4), nitrous oxide (N2O), and CFCs/HCFCs on our minds. These greenhouse gases are basically homogeneously mixed in the atmosphere, and they have very long atmospheric lifetimes (with the exception of methane, centuries). They're the reason that, even if human emissions ceased instantaneously tomorrow, the earth would still see another degree or so of warming. However, the big boon in climate science in the past decade or so has been our increasing understanding of the role that short-lived species play in the climate system. These compounds are more conventionally considered pollutants, and include things like aerosol particulates, ozone precursor compounds, and short-lived greenhouse gases (e.g., tropospheric [surface] ozone and HFCs). The one thing they have in common is their relatively short atmospheric lifetimes, but -- as their physical and chemical properties vary widely -- their mechanisms of impact on our climate system differ. In some cases we don't yet have a full handle on their impacts: for example, uncertainty in cloud-aerosol interactions represents one of the biggest uncertainties remaining in GCMs. (Take a look at the radiative forcing attribution figure from the IPCC AR5 for fun.) 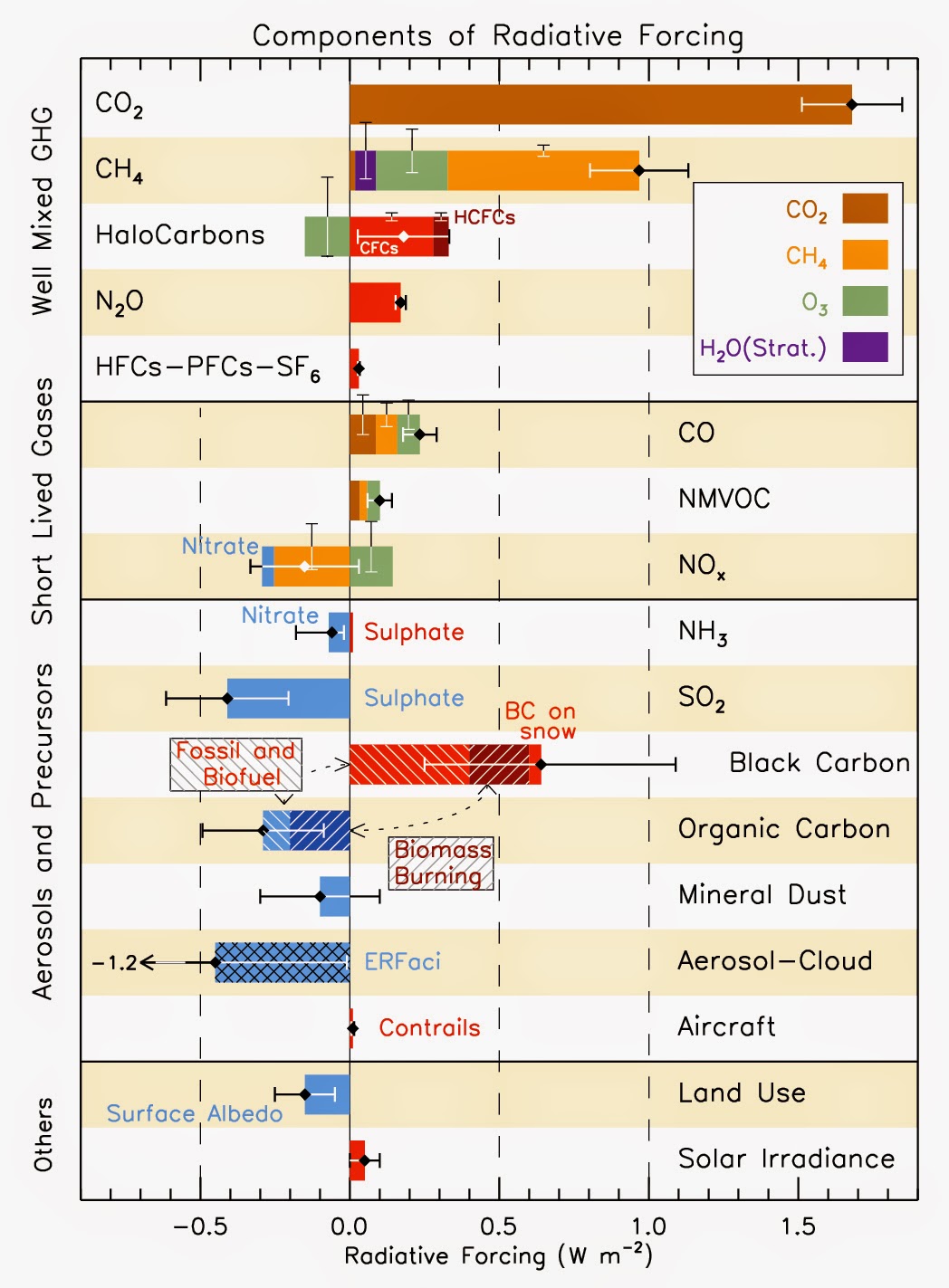 What we do know is this: black carbon is the second or third largest contributor to present warming (after CO2 and perhaps methane, depending on how you partition its impact – it is part LLGHG and part SLCP, since it’s also an ozone precursor). And the four main warming SLCPs combined (BC, tropospheric ozone, methane, and HFCs) have contributed around half of present warming (again, it depends on how you partition methane’s impacts). Moreover, two of these – ozone and BC – have some clear pathways of impact on crops beyond their impacts through temperature and precipitation. Ozone is directly toxic to plants, and BC cuts down on surface radiation, which should negatively impact photosynthesis. And both ozone and BC are very spatially heterogeneous – they are not well-mixed, and so local emissions could very well be expected to have local impacts.

So…given these realities we took the unabashedly empirical approach and threw available data at the problem. We ran a panel regression analysis that included growing season and crop-area averaged temperature, precipitation, and pollutant emissions on the RHS, along with various time controls. Our unit of analysis was major rice- and wheat- producing states in India, and we looked at data from 1980-2010. We find that relative yield loss (RYL) for climate and air pollution (weighted average for India) is 36% for wheat. That is, yields in 2010 would have been 36% higher absent climate and pollution trends over the past 3 decades. Moreover, most of that RYL is due to pollution (90%). (Our estimate for rice RYL is 20% but is not statistically significant.) This suggests a few things: first, cost benefit analyses for air pollution mitigation programs will likely look a lot better in a place like India if agricultural benefits are included. Second, in the near term, cleaning up the air could help offset T- and P-related yield losses.

How should we think about these results in comparison to previous work? First, what we find in terms of climate (T & P) impacts is slightly smaller than the coarser-scale findings for S. Asia by David and Wolfram et al (here). (They find -5-6%, we have -3.5%.) These are probably not statistically different, but one way to think about this is that, absent pollution variables on the RHS, we’d expect the coefficients for T and P to include some of the impacts of SLCPs. The same holds for the time controls. Wolfram and others have made the case that these panel analyses should include quadratic time trends of one form or another to account for an empirical leveling off of yields. Biophysical limits alone make this a totally sensible proposition, but it’s also likely that the “leveling off” trend that has been observed (more on that by David, here) includes the previously unexplored impact of pollution.

Some previous studies have explored the impact of individual pollutants on yields. Max et al looked at black carbon indirectly, by examining the impact of surface radiation on yields (here and here). They see the signature of atmospheric brown clouds on precipitation and thus rice yields, but no direct radiative impact. My best guess is that: (1) their metric of total radiation contains a combination of two effects – a reduction in direct radiation from black carbon and an increase in diffuse radiation from scattering aerosols like sulfates. Plants can often use diffuse radiation more effectively for photosynthesis. (2) More important, rainy-season rice is probably the hardest place to see this signal, as precipitation clears particulates out of the air. We put both BC and sulfur dioxide (the main precursor of sulfate aerosols, which are scattering, or net cooling) in our model to account for these two effects independently, and we see significance for BC’s impact on wheat but not rice, as would be expected based on seasonal concentrations.

On the ozone side of things, a handful of papers have used atmospheric chemistry models to estimate surface ozone concentrations at a given point in time. Those concentrations have then been used in conjunction with exposure-response (E-R) relationships from test plots to estimate yield losses. In theory, if you really do have a good handle on surface concentrations and a valid E-R function, this would be the way to go. The preferred method is AOT40 – accumulated hours of exposure over 40ppbv. But this number is extremely sensitive to crop cultivar, estimated concentrations, when/how long you count exposure, and other management factors. So these kinds of estimates have very large error bars / uncertainties. (See here, here, here, and here.) A few of those studies suggest RYL in 2000 to be 15%-28% for India for ozone though – a comforting similarity in magnitude.

For me, the nice part of this analysis was that we really took a physical approach – we put stuff on the right hand side in forms that made physical sense, and it turned out to hold up to all the (sometimes nonsensical) things reviewers asked us to do. Best of all, the results agree at least in magnitude with some other approaches.

In terms of impact, I hope this paper helps bring agricultural benefits into the conversation about air pollution mitigation. On the methods side, we did a lot of work to think about how to detangle air pollution and climate impacts based on what we can actually measure – an exercise fraught with nonlinearity. I hope some of our work can help guide future efforts to estimate pollution (and pollution policy) impacts. Readers of this blog are well familiar with threshold-y temperature and precipitation effects, but the pollution impacts and mitigation landscape is worse. A real heterogeneous treatment effects nightmare, where everything is co-emitted with other stuff that all acts in different directions with different thresholds. (See FAQ 8.2, Figure 1 from the IPCC AR5 below for a hilarious, if depressing, rendition.) I mentioned the competing impacts on radiation from absorbing and scattering aerosols above, but another interesting example is in ozone formation. Ozone depends on both the absolute and relative concentrations of NOx and VOCs. We had evidence (satellite and ground) that we had both types of ozone regimes (NOx-sensitive or NOx-saturated) in our study area. We used the VOC/NOx ratio to account for that; it should probably be standard practice in these kinds of econometric analyses if you’re doing anything involving NOx or ozone.

All that horn-tooting aside, our analysis was limited in a few ways, and I’m excited to push it in some other directions as a result. A few thoughts:

First, we use emissions, and not concentrations, of pollutants. The main reason is that there aren’t any long-run records of pollutant concentrations in India (or most places, for that matter), and we need better satellite-aided algorithms for extrapolating station data to get these kind of reliable exposure maps (the main task consuming my time right now). So we use emissions inventories of aerosols and ozone precursors as proxies for concentrations. Of course, these inventories are also just estimates, and in some cases (e.g., here) have been shown to be wayyy off (particularly low for black carbon). So I’m looking forward to using better exposure proxies. Ideally, one would look at both emissions estimates (the policy-relevant variable), and concentrations (the physically-relevant variable) together.

Second, we’re also just statistically limited. Emissions of all pollutants have been going up fairly monotonically, and there’s not a ton of signal there for estimation. Going to smaller scales doesn’t make sense from a physical perspective (then you have to worry about transport). So the best thing to do would be to run this same kind of analysis in different countries. I’m particularly excited to look at different pollution regimes – think biomass dominated versus coal dominated, etc. Hopefully I can convince some G-FEEDers that this would be an awesome collaboration idea (ahem, Sol).

I’ll leave off there, though I’m always happy to discuss this stuff if there are any questions. Thanks to G-FEED for having me, and to all of you for reading this tome.