[This is a guest post by Jonathan Proctor, a Doctoral Fellow at the Global Policy Lab and PhD candidate in the Ag and Resource Econ department here at Berkeley]

On Wednesday I, and some notorious G-FEEDers, published a paper in Nature exploring whether solar geoengineering – a proposed technology cool the Earth by reflecting sunlight back into space—might be able to mitigate climate-change damages to agricultural production. We find that, as intended and previously described, the cooling from geoengineering benefits crop yields. We also find, however, that the shading from solar geoengineering makes crops less productive. On net, the damages from reduced sunlight wash out the benefits from cooling, meaning that solar geoengineering is unlikely to be an effective tool to mitigate the damages that climate change poses to global agricultural production and food security. Put another way, if we imagine SRM as an experimental surgery, our findings suggest that the side effects are as bad as the cure.

Zooming out, solar geoengineering is an idea to cool the earth by injecting reflective particles --usually precursors to sulfate aerosols -- into the high atmosphere. The idea is that these particles would bounce sunlight back into space and thus cool the Earth, similarly to how you might cool yourself down by standing in the shade of a tree during a hot day. The idea of such sulfate-based climate engineering was, in part, inspired by the observation that the Earth tends to cool following massive volcanic eruptions such as that of Pinatubo in 1991, which cooled the earth by about half a degree C in the years following the eruption.


First, we find that the aerosols from Pinatubo had a profound impact on the global optical environment. By combing remotely sensed data on the eruption’s aerosol cloud with globally-dispersed ground sensors of solar radiation (scraped from a Russian website that recommends visitors use Netscape Navigator) we estimate that the Pinatubo eruption temporarily decreased global surface solar radiation (orange) by 2.5%, reduced direct (i.e. unscattered, shown in yellow) insolation by 20% and increased diffuse (i.e. scattered, shown in red) sunlight by 20%.


These global all-sky results (i.e. the average effect on a given day) generalize previous clear-sky estimates (the effect on a clear day) that have been done at individual stations. Like a softbox or diffusing sheet in photography, this increase in diffuse light reduced shadows on a global scale. The aerosol-scattering also made redder sunsets (sulfate aerosols cause a spectral shift in addition to a diffusion of light), similar to the volcanic sunsets that inspired Edvard Munch’s “The Scream.” Portraits and paintings aside, we wanted to know: how did these changes in sunlight impact global agricultural production?

Isolating the effect of changes in sunlight, however, was a challenge. First, the aerosols emitted by the eruption alter not only sunlight, but also other climatic variables such as temperature and precipitation, which impact yield. Second, there just so happened to be El Nino events that coincided with the eruptions of both El Chichon and Pinatubo. This unfortunate coincidence has frustrated the atmospheric science community for decades, leading some to suggest that volcanic eruptions might even cause El Niños, as well as the reverse (the former theory seems to have more evidence behind it).

To address the concern that volcanoes affect both light and other climatic conditions, we used a simple “condition on observables” design – by measuring and including potential confounds (such as temperature, precipitation and cloud cover) in the regression we can account for their effects. To address the concurrent El Nino, we do two things. First, we directly condition on the variables though which an El Nino could impact yields – again temperature, precipitation and cloud cover. Second, we condition on the El Nino index itself, which captures any effects that operate outside of these directly modeled channels. Essentially, we isolate the insolation effect by partitioning out the variation due to everything else – like looking for your keys by pulling everything else out of your purse. 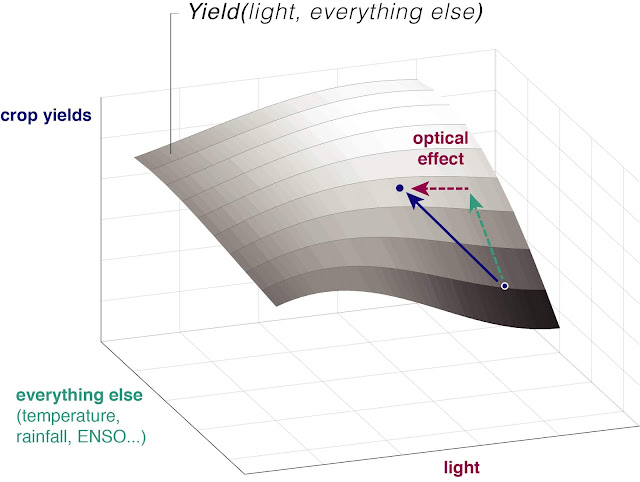 The above figure schematically illustrates our strategy. The total effect (blue) is the sum of optical (red) and climatic components (green). By accounting for the change in yields due to the non-optical factors, we isolate the variation in yields due to stratospheric aerosol-induced changes in sunlight.


Our second result, and the main scientific contribution, is the finding that radiative scattering from stratospheric sulfate aerosols decreases yields on net, holding other variables like temperature constant. The magnitude of this impact is substantial – the global average scattering from Pinatubo reduced C4 (maize) yields by 9.3% and C3 (soy, rice and wheat) yields by 4.8%, which is two to three times larger than the change in total sunlight. We reconstruct this effect for each country in the figure below:


My young cousins dismissed the sign of this effect as obvious – after all plants need sunlight to grow. But, surprising to my young cousins, the prevailing wisdom in the literature tended to be that scattering light should increase crop growth (Sol incessantly points out that David even said this once). The argument is that the reduction in yields from loss of total light would be more than offset by gains in yield through an increase in diffuse light. The belief that diffuse light is more useful to plants than direct light stems from both the observation that the biosphere breathed in carbon dioxide following the Pinatubo eruption and the accompanying theory that diffusing light increases plant growth by redistributing light from the sun-saturated leaves at the top of the canopy to the light-hungry leaves below. Since each leaf has diminishing photosynthetic productivity for each incremental increase in sunlight, the theory argues, a more equal distribution of light should promote growth.


While this “diffuse fertilization” appears to be strong in unmanaged environments, such as the Harvard Forest where the uptake of carbon increased following the Pinatubo eruption, our results find that, for agricultural yields, the damages from reduced total sunlight outweigh the benefits from a greater portion of the light being diffuse.

We cannot tell for sure, but we think that this difference between forest and crop responses could be due to either their differences in geometric structure (which could affect how deeply scattered light might penetrate the canopy): 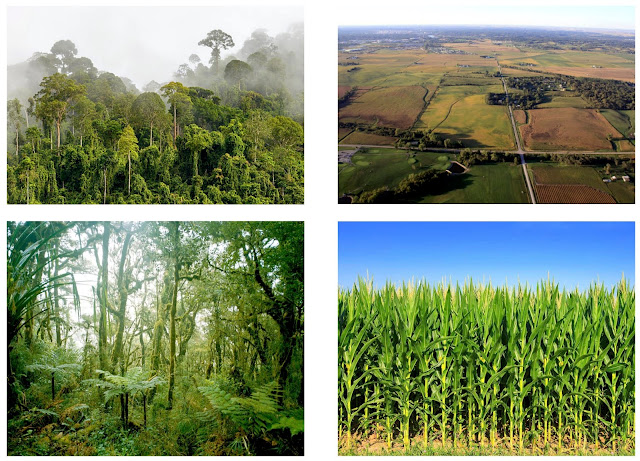 Or to a re-optimization towards vegetative growth at the cost of fruit growth in response to the changes in light:


This latter re-optimization may also explain the relatively large magnitude of the estimated effect on crop yield.


Our final calculation, and the main policy-relevant finding of the paper, is that in a solar geoengineering scenario the damages from reduced sunlight cancel out the benefits from warming. The main challenge here was figuring out how to apply what we learned from volcanic eruptions to solar geoengineering, since the climate impacts (e.g. changes in temperature, precipitation or cloud cover) of a short-term injection of stratospheric aerosols differ from those of more sustained injections (e.g. see here and here). To address this, we first used an earth system model to calculate the impact of a long-term injection of aerosols on temperature, precipitation, cloud cover and insolation (measured in terms of aerosol optical depth). We then apply our crop model that we trained on the Pinatubo eruption (which accounts for changes in temperature, rainfall, cloud cover, and insolation independently) to calculate how these geoengineering-induced changes in climate impact crop yields. This two-step process allows us to disentangle the effects of solar geoengineering on climate (which we got from the earth system model) and of climate on crops (which we got from Pinatubo). Thus, we can calculate the change in yields due to a solar geoengineering scenario even though volcanic eruptions and solar geoengineering have different climatic fingerprints. Still, as with any projection to 2050, caveats abound such as the role of adaptation, the possibility of optimized particle design, or the possibility that variables other than sunlight, temperature, rainfall and cloud cover could play a substantial role.


So, what should we do? For agriculture, our findings suggest that sulfate-based solar geoengineering might not work as well as previously thought to limit the damaging effects of climate change. However, there are other sectors of the economy that could potentially benefit substantially from geoengineering (or be substantially damaged, we just don’t know). To continue the metaphor from earlier, just because the first test of an experimental surgery had side effects for a specific part of the human body does not mean that the procedure is always immediately abandoned. There are many illnesses that are so harmful that procedures known to cause side effects are sometimes still worth the risk. Similarly, research into geoengineering should not be entirely abandoned because our analysis demonstrated one adverse side effect, there may remain good reasons to eventually pursue such a strategy despite some known costs. With careful study, humanity will eventually gain a better understanding of this powerful technology. We hope that the methodology developed in this paper might be extended to study the effects of sulfate aerosol injection on ecosystem or human health and would be open to collaborate on future studies. Thanks for reading, and I’m excited to hear any thoughts the community may have.
Posted by sol at 1:57 PM No comments: