There has been a lot of chatter over the last few years about the purported African growth "miracle" -- the stylized fact that African economies seem to have really picked up speed over the last decade.  I am not really certified to comment on whether something is a miracle (maybe that certification comes with the genius award?), but reviewing the broader patterns and determinants of recent African growth seemed like a useful exercise to this blogger, and hopefully will be as well to the vaunted G-FEED readership.


To answer question #1, I pulled the most recent national accounts data on per capita GDP from the World Bank's World Development indicators.  These are plotted below. On the left is how real GDP per capita has evolved in SSA over the last half century, and on the right is the growth rate in real GDP per capita for SSA (shown in red) as well as a number of other developing and developed regions. 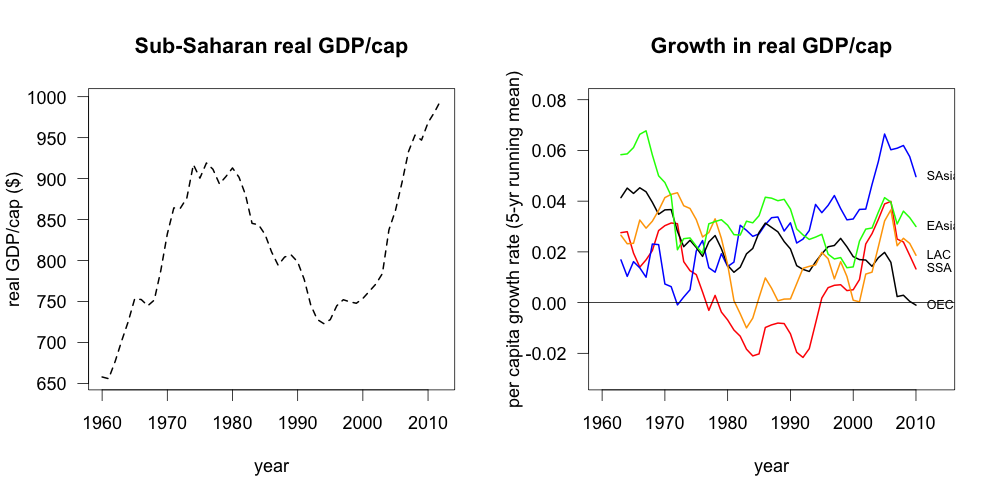 A few things are immediately apparent.  First, Africa does seem to have had a good decade, at least relative to the few before it. Real per capita GDP growth has averaged around 2% for the entire decade, and average per capita incomes across Sub-Saharan Africa are now higher than they have ever been in history. Second, though, Africa's recent performance does not appear to be a "miracle" relative to what other countries have accomplished, as can be seen by comparing recent African growth rates with growth in other developing regions in the right plot.  Nor is its performance an obvious miracle relative to what it has accomplished during past decades.  The continent has had growth surges before, for instance growing at about 2%/year in per capita terms for most of the 1960s and 1970s.  Indeed, per capita incomes only recovered their previous mid-70s after about 2005, and are now only slightly higher than they were 30 years ago.

Some people do not trust these national accounts data and have tried to use other data sources to get at the same question.  For instance, Alwyn Young uses wage and asset data from the Demographic and Health Surveys to reconstruct how consumption has changed over time, and concludes that the story is even better than what national accounts data would suggest (but these findings have been seriously questioned, for instance here).  Henderson, Storeygard, and Weil (2012) in a really cool recent paper use satellite data on the brightness of nighttime lights as a proxy for economic activity.  Although they do not report a SSA-wide growth number, they show that GDP growth derived from night lights is substantially higher than national accounts estimates for a substantial number of African countries (although not all of them), perhaps again suggesting that the national accounts data understate the improvements.

So the overall conclusion seems to be that while recent African performance is not off-the-charts good, either compared to past history on the continent or to other regions over the last few decades, the continent did seem to have a good decade.

So on to question 2:  what explains the uptick in recent performance?  Here the rhetoric about miracles seems particularly unhelpful, given that it's not clear that we'd want Africa's recent performance to be a "miracle" in the Merriam-Webster sense of "an extraordinary event manifesting divine intervention in human affairs".  It would instead be nice if recent growth was instead a function of concerted improvements in some of the suspected constituents of growth:  institutions that protect and support political and economic rights, policies that help capital flow to high-return investments, long term investments in agriculture and education that have started to bear fruit, etc.

Perhaps not surprisingly, it turns out there is still a lot of disagreement over why Africa has done better in the 2000s relative to the 1980's and 1990s.

Here's the upbeat news from the consultancy McKinsey in an attractively titled report "Lions on the move": "Africa's economic pulse has quickened, infusing the continent with a new commerical vibrancy....  Africa's growth acceleration resulted from more than a resource boom.  Arguably more important were government actions to end political conflicts, improve macroeconomic conditions, and create better business climates, which enabled growth to accelerate broadly across countries and sectors."

Compare that to the view of long-time Africa hand Michael Lipton:  "Stop kidding ourselves. Faster GDP growth in Africa since 2000 is mainly a mining boom, with dubious benefits. Staples yields (and labour productivity) have not reversed the dismal trends that Peter Timmer diagnosed two decades ago: big, credible rises are seen in only a few African countries (e.g. Rwanda, Ghana). The populous ones (Ethiopia, Nigeria, maybe Kenya, above all DR Congo) tell a sad tale."

National accounts data can again be used to shed some light on this debate.  Below are a couple plots from a periodic Africa-focused World Bank report called "Africa's Pulse".  The top one shows how resource-rich countries performed relative to non-resource rich countries, and the bottom one shows the sectoral composition of growth in the fast-growing African countries. 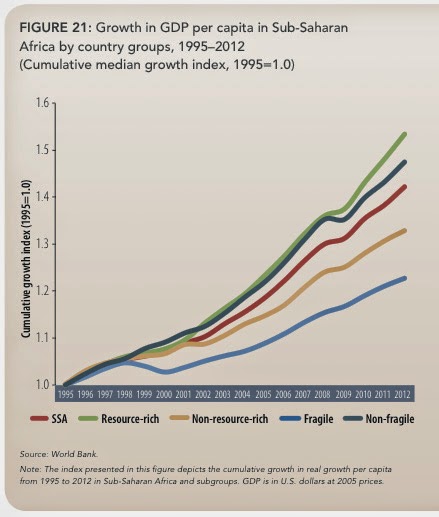 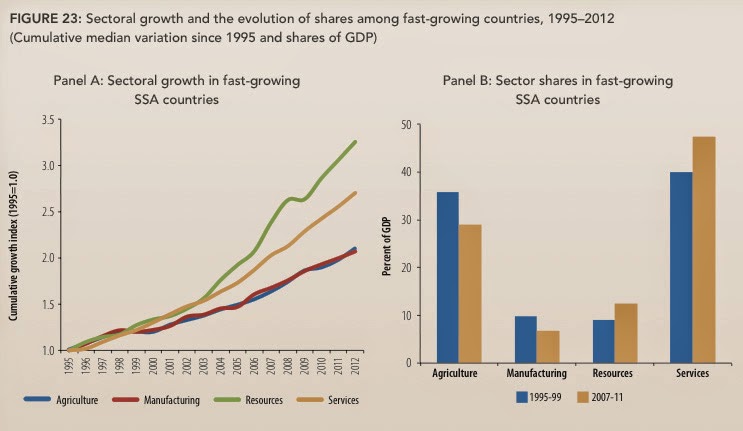 These data seem to suggest a story in between the Lipton view and the McKinsey view:  growth was substantially higher in resource-rich countries (both oil and non-oil) relative to non resource rich countries, although as the report explains there were some notable performers in the latter group (Rwanda, Ethiopia). And as shown in the bottom plot, all sectors grew over the period since the mid 1990s.  For those interested in agriculture, there is also recent evidence that agricultural productivity was also on the rise in many, though not all, African countries;  total factor productivity (total outputs per total inputs) improved in Eastern and Southern African over the last few decades but was flat or declined in much of Central Africa, the Sahel, and the Horn.

But just looking at broader sectoral patterns of growth does not really answer the fundamental question about what caused growth.  For instance, observed "broad based" patterns of growth -- i.e. the fact that resource sectors and non-resource sectors (services, manufacturing) both appeared to be growing -- could still be consistent with resources booms that increase demand for local non-tradeables.  Indeed, the fact that services grew much faster than manufacturing (and, with resources, grew as a proportion of the economy while ag and manufacturing shrank) is some evidence that this might the case.  Was it just the case that higher mineral prices gave miners more money and they decided to buy more sandwiches and haircuts?  It's hard to know.

Similarly, concluding that productivity growth was driven by a declining share of the labor force in agriculture, as argued by a recent NBER paper, does not necessarily tell us what the driver was of this declining share. The fact that most people that left farming ended up in the informal services sector is again not obvious evidence of broad-based or sustainable growth.

Maybe some readers know of better-identified studies of the sources of recent productivity growth in African economies?  In the absence of these studies, it seems right to conclude that Africa is doing better, but it seems pretty hard to know what to make of this improvement -- where it came from, and whether it might last.

Posted by Marshall Burke at 1:39 PM