A flood of crop data, and a study on drought

As the growing season gets under way in the Midwest, we have a paper out today in Science on yield trends in the region, and the role of drought. The paper is here and a summary story here. (I'll also post a link asap to a pdf for those without access to Science here). There's also a very nice companion piece by Don Ort and Steve Long here.

The paper relates to this post a while back on yield sensitivity. The short story is that lots of things could be making crops more or less sensitive to weather, so it’s an interesting empirical question as to whether overall sensitivity is actually rising or falling. And it seems a useful question, at least in the context of estimating the costs of climate change, because if sensitivity is declining then it would mean impacts of climate change might be overstated (i.e. systems are adapting), whereas if sensitivity is growing it would mean impacts could be bigger for future cropping systems than the current ones (what’s the opposite of adapting? Is anti-adapting a word?).

The new paper shows that for corn in the US, sensitivity to drought appears to be rising. Yields now seem about twice as sensitive to hot, dry conditions as they were 20 years ago. It’s not that farmers get worse yields in drought years than they used to, but they are really making fast progress under better conditions. Progress has been much slower for hot, dry conditions, which we think may indicate farmers and their crops are pushing the limits of what’s possible in those years. Or at least what's possible with current technology (Ort and Long mention this paper about how changing canopy structure might help, and there are other ideas out there too. Maybe a topic for another day).

See the paper for more details. What I wanted to focus this post on was something that may get lost in the paper's and coverage's emphasis on the "big picture", which is how cool the dataset we worked with is. And it’s posted here or here for people to play with if they want. The animation below gives a sense for the yield data for three of the states over time (red=high yields, purple=low). There’s over a million observations of corn and soy fields around the country since 1995, and associated weather variables. (We are not allowed to release anything that could be used to identify farmers, so the fields are random samples of a larger dataset and don’t have location information beyond the county level.)

The study also relates to this previous post on how cool the MARS approach to data analysis is. It played a very helpful role in this study, and it was surprising just how well it picked up effects of weather. The figure below shows the six factors identified as important, and the functional form identified. The most important (consistent with previous work) is high vapor pressure deficits in the period of 61-90 days after sowing, which is around flowering for corn. The MARS model with just these six variables explained about 32% of the variance in the dataset (a number we somehow neglected to mention in the paper!). That’s an awful lot of variance for a field level dataset with all sorts of variation going on, including in soils and off-season weather. I’d be curious if any other simple model could do as well (the data are there if you want to have a go at it). 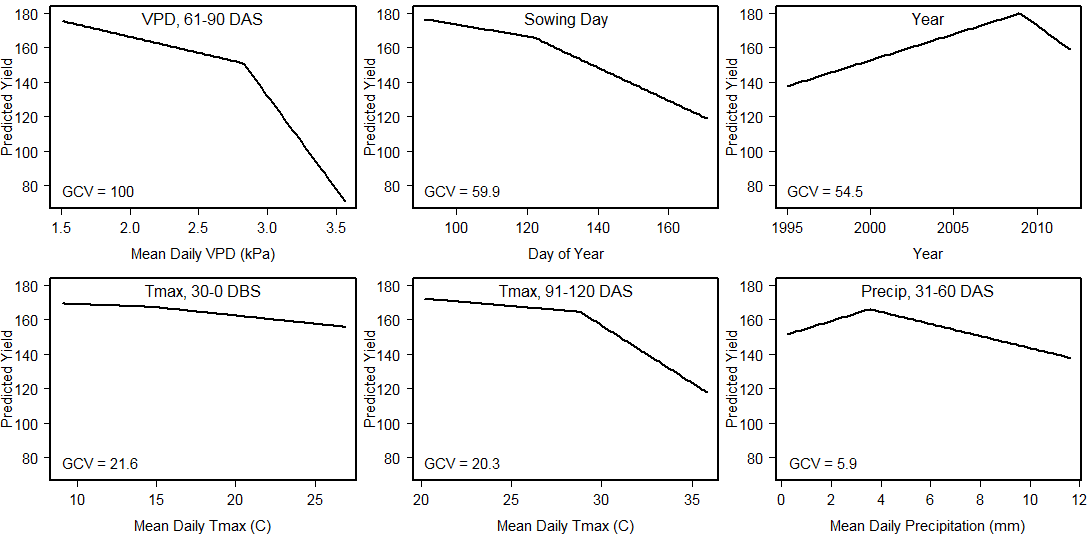 (Update 1: An interview I did is here, which are things I actually said, as opposed to what I'm sometimes quoted as saying based on a reporter's memory or attempt to jumble three things into one sentence.)
Posted by David Lobell at 4:09 PM