Trump's recent announcement that the US would withdraw from the Paris Accords was hailed as a monumental political, environmental, and economic mistake.  But given all the theater surrounding the announcement, others also saw it as an effort to distract the public from the ongoing investigation of the Administration's ties to Russia.

It's hard to see how this latter claim could actually be evaluated.  But it got me thinking:  what are the benefits to Russia of the US withdrawing from the Paris accords?  Was the US withdrawal a climate gift to Russia?

Now, I'm guessing Trump has not read our paper showing that warming temperatures will have unequal economic effects around the world (unlike Obama, to repeat my shameless self promotion from last week).  In that paper, and consistent with a huge microeconomic literature, we see clear evidence in the historical data that cold high-latitude countries tend to experience higher GDP growth when temperatures warm, with the reverse being true in most of the rest of the world where average temperatures are already warmer (the US included).  Basically, if you're currently cold, you do better when it warms up;  if you're already warm, additional warming hurts you.  Pretty intuitive, and also shows up very clearly in the half century of data we have on economic growth from around the world.


Last week we calculated the potential harm done to the economy of withdrawing from Paris.  The idea was this:  withdrawing from the Paris accords would make global temperatures rise relative to what they would have been if the US had met its Paris obligations (an additional +0.3C by 2100, according to these guys).  For reasons already stated, warming temperatures are bad for overall economic output in the US. So we can then calculate, what's the difference in output between now and 2100 that would occur in a withdrawal versus a non-withdrawal world?  For the US, the effects were pretty big:  I calculated that, in present value (i.e. discounting future losses at 3%), the US economy would lose about $8 trillion between now and 2100 due to the extra temperature increase induced by withdrawing from Paris.

What about Russia?  Again, Russia is cold, so extra warming is likely to help the Russian economy, all else equal.  You can actually see this really clearly in the Russian data.  Below is the plot of Russian GDP growth rates versus Russian temperatures, using data 1990-2010 (1990 being the first post-Soviet-collapse year that "Russia" shows up in the national accounts data).  Specifically, these are growth deviations from trend versus temperature deviations from trend;  we are detrending the data since you don't want to conflate trends in temperature that could be correlated with other trending factors that also affect growth. 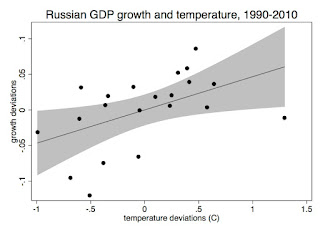 This is just 20 data points, but the estimated effects are HUGE.  Basically, Russian GDP growth is multiple percentage points higher when temperatures warm by a degree C.  And the Russia-specific estimate is even higher than what we would predict the effect would be for Russia using the global response function pictured in blue above.

Anyway...  Basically what I did is to re-do the same calculation we did last week for the US, but now focusing on effects on the Russian economy and calculating what happens to Russian GDP in the scenario where the US withdraws from Paris versus the scenario where the US stays in.  To be conservative, I use estimates from the global response function, not the Russia-specific mega-response just noted.

Here's the main finding:  Trump's decision to withdraw the US from Paris is a $2.2 trillion dollar gift to Russia (paid out over the next 85 years).  Below is the figure showing what happens to Russian GDP under a withdrawal versus a no-withdrawal scenario (left), and the annual gains in GDP in each year (to 2100).  By 2100, Russia is ~10% richer than it would have been otherwise, and the (discounted) sum of these GDP gains is about $2.2 trillion dollars.

Given that there's no evidence that Trump has read our paper, I don't think we can claim that this climatic gift to Russia was purposeful.  But it's sadly ironic that an announcement that might have been meant to distract us from Russian meddling was simultaneously a monumental economic gift to that country.

Posted by Marshall Burke at 5:15 PM