Bob Kopp, Amir Jina, James Rising, and our partners at the Climate Impact Lab, Princeton, and RMS, have a new paper out today.  Our goal was to construct a climate damage function for the USA that is "micro-founded," in the sense that it is built up from causal relationships that are empirically measured using real-world data (if you're feeling skeptical, here's are two videos where Michael Greenstone and I explain why this matters).

Until now, the "damage function" has been a theoretical concept. The idea is that there should be some function that links global temperature changes to overall economic costs, and it was floated in the very earliest economic models of climate change, such as the original DICE model by Nordhaus where, in 1992, he described the idea while outlining his model:


The "extremely elusive" challenge was figuring out what this function should look like, e.g. what should theta_1 and theta_2 be? Should there something steeper than quadratic to capture really catastrophic outcomes? Many strong words have been shared between environmental economists at conferences about the shape and slope of this function, but essentially all discussions have been heuristic or theoretical.  We took a different approach, instead setting out to try and use the best available real world empirical results to figure out what the damage function looks like for the USA.  Here's what we did.

We started out by recognizing that a lot of work has already gone into modeling climate projections for the world, by dozens of teams of climate modelers around the world. So we took advantage of all those gazillions of processor-hours that have already been used and simply took all the CMIP5 models off the shelf, and systematically downscaled them to the county level.

Then we indexed each model against the global mean surface temperature change that it exhibits. Not all models agree on what warming will happen given a certain level of emissions. And even among models that exhibit the global mean temperature change, not all models agree on what will happen for specific locations in the US.  So it's important that we keep track of all possible experiences that the US might have in the future for each possible level of global mean temperature change.  Here's the array of actual warming patterns in maps, where each map is located on the horizontal axis based on the projected warming under RCP8.5 ("business as usual"). As you can see, the US may experience many different types of outcomes for any specific level of global mean warming. 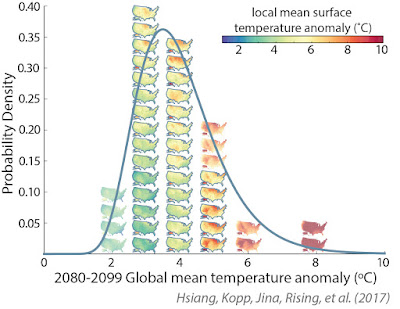 Then, for each possible future warming scenario, we build a projection of what impacts will be in a whole bunch of sectors, using studies that meet a high empirical standard (pretty much the same one Marshall and I used in our conflict meta-analysis, plus a few other additional criteria). This was relying on a lot of previous work done by colleagues here, like Mike/Wolfram/David's crop results and Max's electricity results. We project impacts in agriculture, energy, mortality, labor and crime using empirical response functions. For energy, this got a little fancy because we hooked up the empirical model to NEMS and ran it as a process model. For coastal damages, we partnered with RMS and restructured their coastal cyclone model to take Bob's probabilistic SLR projections and Kerry Emanuel's cyclone projections as inputs---their model is pretty cool since it models thousands of coastal flood scenarios, and explicitly models damages for every building along the Atlantic coast. The energy and coastal models were each big lifts, using process models with empirical calibration, as were the reduced form impacts since we resampled daily weather and statistical uncertainty for each impact in each RCP in each climate model; this amounted to tracking 15 impacts across 3,143 counties across 29,000 possible states of the world for every day during 2000-2099. These are maps of the median scenarios for the different impacts: 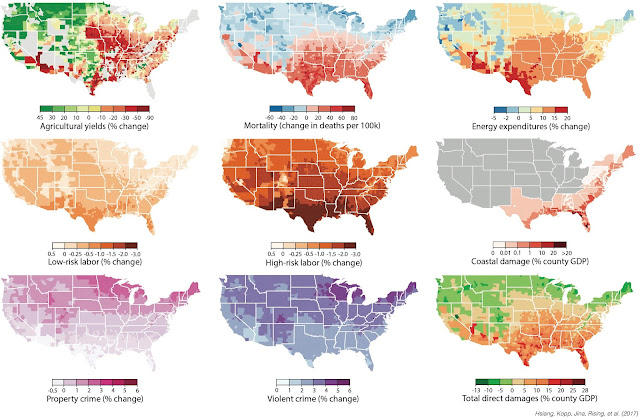 Then, within each possible state of the world, we added up the costs across these different sectors to get a total cost. Doing this addition first is important because it accounts for any cross-sector correlations that might emerge in the future due to the spatial correlations in economic activity (across sectors) and their joint spatial correlation with the future climate anomaly (a bad realization for energy, ag, and mortality all might happen at the same time).  We then take these total costs and plot them against the global mean temperature change that was exhibited by the climate model that generated them. There ended up being 116 climate models that we could use, so there are only 116 different global temperature anomalies, but each model generated a whole distribution of possible outcomes due to weather and econometric uncertainty. Plotting these 116 distributions gives us a sense of the joint distribution between overall economic losses and global temperature changes:

We can then just use normal statistics on these data to describe this joint distribution succinctly, getting out some equations that other folks can plug into their cost calculations or IAMS.  Below is the 5-95th intervals for the probability mass, as well as the median. To our knowledge, this is basically the first micro-founded damage function: 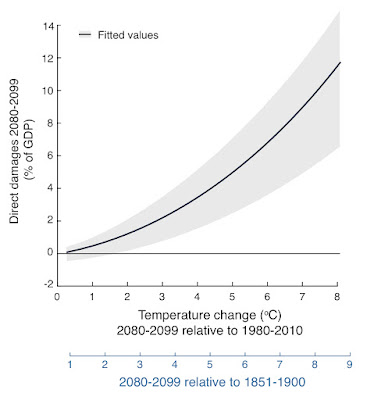 It turns out that Nordhaus was right about the functional form, it is quadratic. In the paper we try a bunch of other forms, but this thing is definitely quadratic. And if you are happy with the conditional average damage, we can get you the thetas:

Now, of course, as we say several times in the paper, this function will change as we learn more about the different parts of the economy that the climate influences (for example, since we submitted the paper, we've learned that sleep is affected by climate). So for any new empirical study, as long as it meets our basic criteria, we can plug it in and crank out a new and updated damage function.

Beyond the damage function, there is one other finding which might interest the G-FEED crowd. First, because the South tends to be both hotter, it is disproportionally damaged by nonlinear climate impacts where high temperatures impose higher marginal damages (ag, mortality, energy & labor). Also, along the Gulf and southern Atlantic coast, coastal damages get large. The South also happens to be poorer than the North, which is impacted less heavily (or benefits on net, in many cases). This means that damages are negatively correlated with incomes, so the poor are hit hardest and the rich lose less (or gain). On net, this will increase current patterns of economic inequality (a point the press has emphasized heavily). Here are are whisker plots showing the distribution of total damage for each county, where counties are ordered by their rank in the current income distribution: 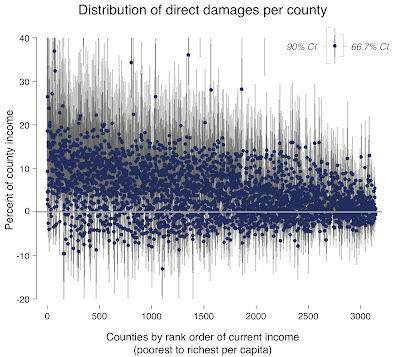 Note that nothing about this calculation takes into account the possibility that poor counties have fewer resources with which to cope, this is just about interaction of geography and the structure of the dose-response function.

This widening of inequality probably should matter for all sorts of reasons, including the possibility that it induces strong migration or social conflict (e.g. think about current rural-to-urban migration, the last election, or the Dust Bowl). But it also should matter for thinking about policy design and calculations of the social cost of carbon (SCC).  Pretty much all SCC calculations (e.g. DICE, FUND, PAGE) think about climate damages in welfare terms, but they compute damages for a representative agent that either represents the entire word, or enormous regions (e.g. the USA is one region in FUND). This made sense, since most of the models were primarily designed to think about the inter-temporal mitigation-as-investment problem, so collapsing the problem in the spatial dimension made it tractable in the inter-temporal dimension.  But it makes it really hard, or impossible, to resolve any inequality of damages among contemporary individuals within a region (in the case of FUND) or on the planet (in the case of DICE). Our analysis shows that there are highly unequal impacts within a single country, and this inequality of damages can be systematically incorporated into the damage function above, which as its shown is simply aggregate losses (treating national welfare as equal to average GDP only).  David Anthoff and others have thought about accounting for inequality between the representative agents of different FUND regions, and shown that it matters a lot.  But as far as I know, nobody has accounted for it within a country, and this seems to matter a lot too.

In the online appendix [Section K] (space is short at Science) we show how we can account for both inequality and risk, capturing both in a welfare-based damage function. Using our data and a welfare function that is additive in CRRA utilities, we compute inequality-neutral certainty-equivelent damage functions. These are the income losses that, if shared equally across the entire US population with certainty, would have the same welfare impact as the uncertain and unequal damages that we cover (i.e. shown in the dot-whisker plot above).  Two things to note about this concept. First, this adjustment could theoretically make damages appear smaller if climate changes were sufficiently progressive (i.e. hurting the wealthy and helping the poor). Second, there are two ways to compute this that are not equivelent; one could either compute the (i) inequality in risks borne by different counties or (ii) risks of inequality across counties. We chose to go with the first option, which involves first computing the certainty-equivelent damage for each county, then computing the inequality-neutral equivalent damage for that cross-sectional distribution of risk. (We thought it was a little too difficult for actual people to reasonably imagine all possible unequal states of the future world before integrating out the uncertainty.)

We compute these adjusted damages for a range of parameters that separately describe risk aversion and inequality aversion, since these are value judgements and we don't have strong priors on what the right number ought to be. Below is a graph of what happens to the damage function as you raise both these parameters above one (values of one just give you back the original damage function, which is the dashed line below). Each colored band is for a single inequality aversion value, where the top edge is for risk aversion = 8 and the lower edge is risk aversion = 2:

What we see is that adjustment for inequality starts to matter a lot pretty quickly, more so than risk aversion, but the two actually interact to create huge welfare losses as temperatures start to get high. For a sense of scale, note that in the original DICE model, Nordhaus defined "catastrophic outcomes" as possible events that might lower incomes by 20%.

Bob, David Anthoff and I have debated a bit what the right values for these parameters are, and I'll be the first to say I don't know what they should be. There are several estimates out there, but I think we really don't talk about inequality aversion much so there's not a ton to draw on. But, just like the discount rate (which has received a lot of attention/thought/debate), these ethical parameters have a huge influence on how we think about these damages. And looking at this figure, my guess is that inequality aversion may be just as influential on the SCC as the discount rate---especially once we start having global estimates with this kind of spatial resolution.  I think this is one of the most important directions for research to go: figuring out how we are supposed to value the inequality caused by climate change and accounting for it appropriately in the SCC.
Posted by sol at 6:00 AM