Over the years, there have a been a handful of critiques of some of our prior research on GDP growth centering on the concern that we model country-specific time trends in growth rates. This concern seems to be experiencing a resurgence, due in part to an RFF working paper by Richard Newell, Brian Prest, and Steven Sexton which claims that including trends in GDP growth regressions is "overfitting" (I'll probably post about this paper in greater depth later). In addition, Richard Rosen recently posted a PNAS comment asserting that this approach was obviously flawed, and Richard Tol has been tweeting something similar.

So is it obviously wrong to account for trends in growth rates when looking at GDP growth data?  One way to settle this would be to look at some GDP growth data.

Grabbing the GDP growth data from our 2015 paper, I write a single (very boring) command that regresses GDP per capita growth rates for the USA on time and a constant (for the period 1960-2013). 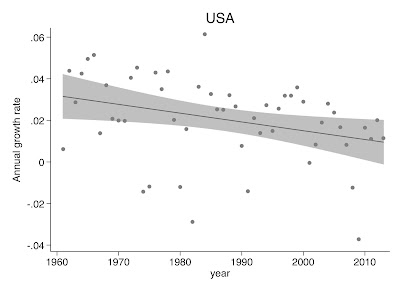 So it certainly seems that growth is unlikely to be constant over time. (Remember that a trend in growth rates means that log(income) over time is not linear, but curved.) Newell et al. advocate for treating the above time series as if it is centered around a constant (not a downward trend), which seems at odds with the data itself, the macro-economic theory of convergence, as well as the findings of the Newell et al analysis itself (more on that in the later post). Nowhere in the Newell et al. paper, the Rosen comment, or the Tol tweets did the authors look at the data and ask if there was statistical evidence of a trend.

The modeling approach in our previous work goes further than this, however. For example, in our 2015 paper we allow each country to exhibit a growth rate that has a (potentially) quadratic country-specific time trend.  This modeling choice was not arbitrary, but actually resulted from looking at our data fairly carefully.

First, countries sometimes have trends in growth that are not linear. As shown above, the trend in USA growth is extremely linear, so in a quadratic model the coefficient on the quadratic term will basically be zero and have no effect on the model (it's precisely -2.89e-06 if you try it with the USA data). But in other cases, the trend is clearly not linear. Take China for example: economic policies in China have changed dramatically over the last several decades, and the rate of these changes has itself not been steady, so the rate of changes in growth rates might itself change (implying curvature in a trend). This turns out to be reasonable intuition, and the quadratic term in a China-GDP time series regression proves to be nonzero and significant.

Second, different countries have different trends in growth, so it's important that trends in growth are country-specific. This too is pretty obvious if one looks at GDP growth data. For example, India's growth rate has been increasing over time (0.1% per year per year, p-value < 0.000) while the USA's growth rate has been declining (-0.043% per year per year, p-value = 0.018). A simple F-test strongly rejects the hypothesis that they are the same trend (p-value < 0.000). Newell et al. and others seems to advocate for models that assume trends are the same across all (or many) countries without testing if there is statistical evidence that these trends are different. Halvard Buhaug made a similar error in his critique of some of Marshall and David's work on climate and conflict (Kyle Meng and I demonstrated the single-command F-test Buhaug should have used in a PNAS paper).  Here are plots from four major economies demonstrating the diversity of trends that show up very clearly in the data: 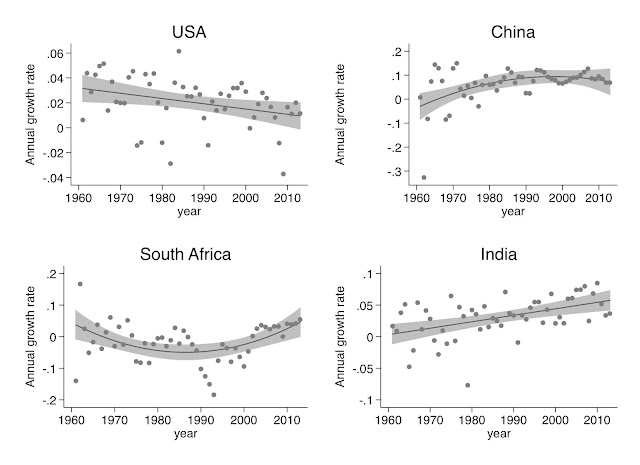 The safest way to deal with these facts (at least in the climate-economy contexts that we study) is to allow trends in growth rates to be modeled flexibly so that they can be different across countries and they can be curved if the data suggest they should be. There are multiple ways to do that, and country-specific quadratic trends is one straightforward way to do it. If the trends are actually linear, they will be modeled as basically linear (statistical software may actually drop the quadratic term if trends are linear enough). And if they are are the same across countries, they will be estimated to be the same. But if they are in fact different across countries, or curved over time, the model will not erroneously assume they are homogenous and constant.

I think the meta-moral of the story is to simply look at your data and listen to what it is telling you.  F-tests and the "plot" command are both compelling and often underutilized.
Posted by sol at 6:00 AM