Lately I’ve been thinking about siestas. And not just because of the extremely warm summer – I mean February – we are having in California. Taking an afternoon break is probably one of the oldest and most widespread adaptations humans have in the face of hot weather. Better to work hard in the morning and late afternoon when the heat is not too bad, and take a break when you would otherwise be unproductive. For example, I was never so willing to wake up at 4am as when I was doing field work in Sonora, Mexico in July – it meant I could get most of the day’s work done by lunch and not face the afternoon sun and heat. I can only guess that a similar strategy explains Max’s daily naps in his office, though Berkeley isn’t typically all that hot.

Although humans have widely adopted this practice, we don’t typically think of it as a strategy for how we grow crops. But various studies seem to suggest that the best way to adapt to extreme heat may be to have crops take a break. This can be done on two different time scales. In a day, we can select for crops that slow down growth during hours that are the hottest, and have the highest vapor pressure deficits. This avoids using water at the times when the efficiency of using water would be lowest. A nice recent review by Vincent Vadez and colleagues discusses some of the ways crop scientists are selecting for this trait. As I’ve mentioned in past posts, it’s a strategy we are trying to evaluate as a possible adaptation to climate change. It probably helps a little, but it’s not clear how much.

At longer time scales, it’s possible to just scrap the idea of growing a crop during the peak of the summer, and instead try to fit in two crops that straddle this period. This is the idea behind a recent paper we have led by my student, Chris Seifert, on double cropping trends and potentials in the US. Part of the challenge of double cropping is that it pushes the late summer crop (typically soybean) into greater risks of frost damage at the end of the season. But with warming temperatures, crops develop more quickly and the frost dates recede. This idea has been around for a while, but the idea of the paper was to simulate how much more viable the practice is actually becoming and will continue to become.

The basic approach was to develop a realistic model of phenology for a wheat-soy double crop, and see how often the two crops can be squeezed in between the last frost of spring and the first frost of fall. Below is a summary of the projected suitability (% years of survival) for current and future conditions under two emission scenarios (top is low emissions, RCP4.5, and bottom is high emission, RCP8.5). The current simulated limits match pretty well where existence of double cropping extends in reality (roughly to the south of Illinois). But by mid-century the area suitable has shifted at least a full state northward, and by 2100 is roughly double or triple the current suitable area depending on emission. It’s also slightly interesting that really warm scenarios actually make this particular system less suitable in the South, because wheat can’t vernalize properly. 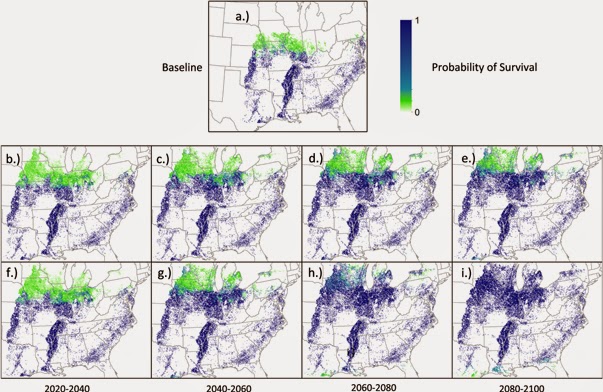 The other thing the paper looks at is whether warming has already encouraged a spread of double cropping. The data to look at double-cropping are pretty coarse in spatial resolution and short in time, but the trends do seem consistent with the simulated increase in suitability. For example, the figure below shows the fraction of reported double-cropping (red line) in states that historically have had frost limitations vs. the simulated suitability in those states for three different thresholds of survival (survival = soy maturing before first frost). 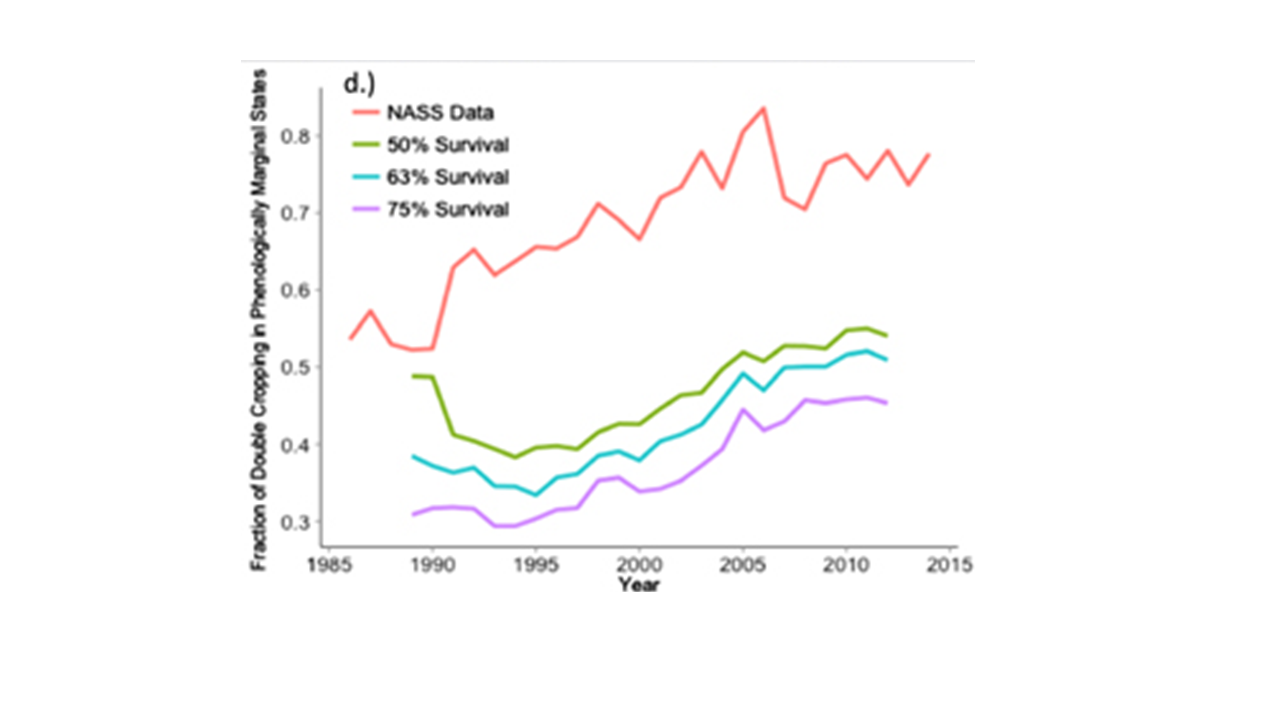 Just to be clear, this isn’t a definite gain relative to sticking with a single summer crop of corn or soybean. That would depend on prices and yields, both of which will also depend on what climate is doing. And even if it’s a gain, it could well still be worse than what could be achieved in the current climate with a single crop (for reasons we get into in the paper). Just like taking a siesta may make you more productive than if you didn’t, but not more productive than you’d be without the hot weather. But if nothing else it is an intriguing option that could make sense in a lot more places than it used to. And for many places it falls in the category of things that wouldn’t make much sense without climate change, because of the frost constraint, which I think is a key criterion for a truly effective adaptation.

Overall, maybe the lesson here is the corollary of what Marshall blogged about a few months ago. If we are learning that people’s response to heat is empirically not that different from crops, maybe it follows that strategies people have adopted to deal with heat can give us an idea of what might work well with crops. And maybe with all the heat lately – at least in the Western U.S. – people should start taking more siestas too. Max must just be testing out his adaptation strategy.