Crop Insurance and the Disincentive to Adapt to Extreme Heat

Francis Annan and I have a new paper that looks at US crop insurance and whether it gives farmers a disincentive to adapt to extreme heat.  The increased frequency of extreme heat under climate change is predicted to lower corn and soybean yields going forward.  Reducing the sensitivity to extreme heat would go a long way in avoiding some of the predicted damages, but there has been no observable progress in relative heat sensitivity over the last six decades. One possible explanation is that government policies bail out farmers and give them a disincentive to adapt.

The United States Federal Crop Insurance Program (FCIP) has gained tremendous momentum in recent decades and has become one of the major agricultural support program in the United States. Created in the 1930s, the crop insurance programs have undergone many developments through the revisions in various federal farm bills, acts, and assistance programs. The 1994 "Crop Insurance Reform Act" had the goal to eliminate annual disaster programs. It made participation in the insurance program mandatory to be eligible for disaster payments. This act implemented catastrophic (CAT) coverage to protect producers against major losses at no cost to producers. In recent years, legislative mandates have further increased the premium subsidy, in addition to the introduction of new insurance products. As a result the program has experienced tremendous growth in participation, especially following the 1994 act (Annan, Tack, Harri and Coble).

The fraction of total crop insurance premiums that is subsidized by the government greatly increased between 1981-2013, especially following the 1994 Crop Insurance Reform Act as shown in the following graph. Subsidy ratios increased from 20% in the early 1980s to 60% in recent years for both corn and soybeans. 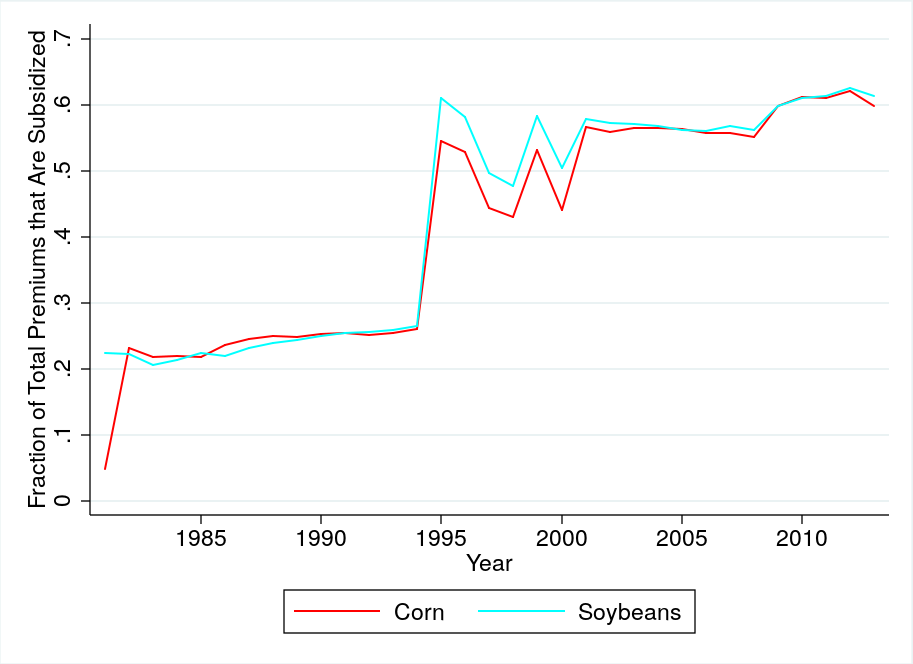 The following figures show total planted area for corn and soybeans as solid lines, which has remained rather constant between 1981-2013.  The dashed line shows the planted area that is insured under the federal crop insurance program.  There is a large increase over time and by now almost all planted area is insured. 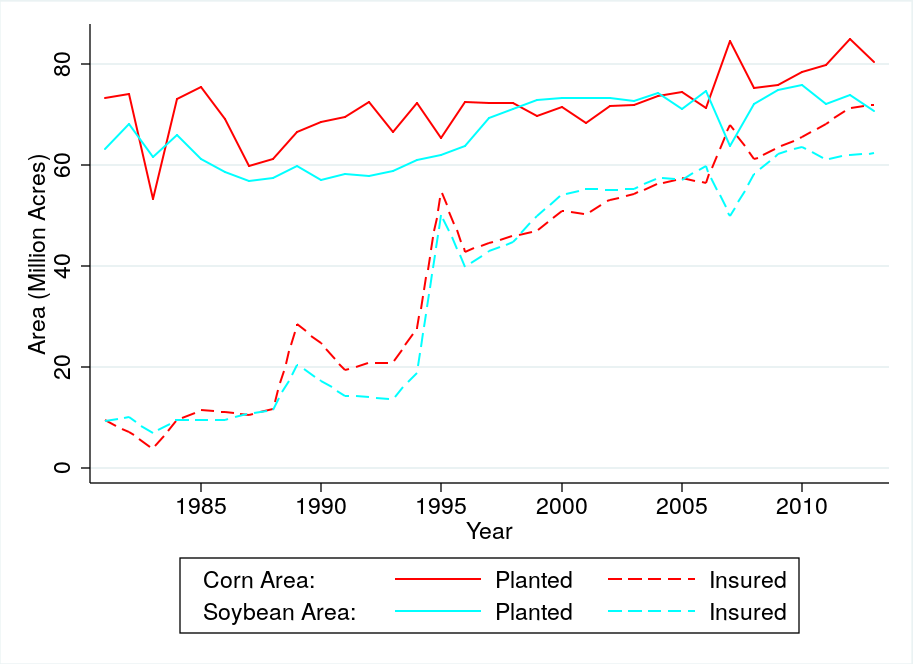 Did the increase in insured area increase the sensitivity to extreme heat?  We run a regression where we link log yields in a county on four weather variables: moderate heat, extreme heat and a quadratic in season-total precipitation (April-September). We also include county fixed effect, year fixed effects to pick up shifts in overall price levels or regulatory changes and county-specific quadratic time trends as there have been different warming trends across the US (Burke and Emerick). Finally, we interact the weather measures with the fraction of the area that is insured.  The results are given in the following table. 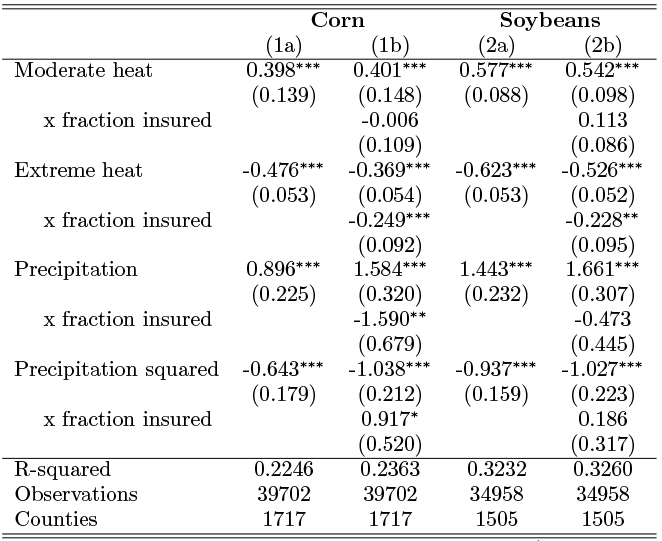 Columns (a) replicate the standard weather-yield relationship. We find that extreme heat has a harmful effect that is an order of magnitude larger than the beneficial effect of moderate heat.  The results also indicate am inverted-U-shape for precipitation that is comparable to previous results and implies an optimal amount for precipitation that is comparable to agronomic estimates. Columns (1b) and (2b) interact the weather-sensitivity of yields with the fraction of the area planted that is insured. The weather-sensitivity of an uninsured field is the coefficients on the weather variable, while the sensitivity of an insured field is the sum of the coefficient on the weather variable and the interaction term. We find that for both corn and soybeans, insured areas exhibit the same sensitivity to beneficial moderate heat, but are more sensitive to fluctuations in extreme heat.  The sensitivity to extreme heat is 67% larger for insured corn than for uninsured corn and 43% larger for insured soybeans than uninsured soybeans.

We conduct various sensitivity checks: The results are comparable whether we use a common quadratic time trend for all counties, a state-specific quadratic time trend, or the county-specific quadratic time trends.  Most importantly, the results are consistent whether we estimate them for the years 1981-2013, 1981-1996, or 1997-2013. Average subsidy rates in the first half are 27% but increase to 55% in the second half as the insured planted area increase from roughly one-fourth to three-fourth while the total planted area remains constant.  While insurance coverage is endogenous, our coefficients of interest interact it with exogenous weather variation. The interacted coefficients correctly identify the sensitivity of the insured field, however, it could be because insured fields are different (e.g., marginal land that is ensured has higher sensitivities), or because crop insurance gives a disincentive to reduce the damaging effects. We believe it is the latter: the heterogeneity story seems unlikely given that we account for county fixed effects, year fixed effects as well as county-specific time trends during a time period when insurance coverage greatly increases. The marginal decision on which areas to insure hence greatly changes over our study period.

Posted by Wolfram Schlenker at 6:41 PM