We've blogged before (ad nauseam?) about our ongoing research that suggests that changes in climate could substantially affect patterns of human violence.  Imagine, for a moment, that you buy these results.  A natural question is, how much should we care?

One way to answer this question it to try to calculate the added economic cost of a climate-induced change in conflict.  E.g., if temperatures were to rise 1 degree, what would be the economic cost of the ensuing increase in conflict?  Expressing the cost in dollars then allows us to compare it against other things we spend money on to give a sense of how "large" the costs of climate-induced violence might be.  And to the extent that we actually think future changes in climate could increase conflict risk, such a calculation could also inform estimates of the "social costs of carbon" -- essentially, the overall cost of emitting one more ton of CO2 today.

Clearly it is not easy to calculate how much a climate-induced change in conflict would cost. It's going to be some combination of the economic damage wrought by different types of conflict, and the increase in each type of conflict due to a change in climate.   Our paper provides some estimates of the latter, but figuring out the former seems like a real bear.

This is why it was very interesting to see a new report entitled "The Economic Cost of Violence Containment", put out by a group called the Institute for Economics and Peace [ht: Tom Murphy].  As the title suggests, the goal of this report is to calculate the aggregate economic costs of violence and what we spend to contain it.   Violence, they calculate, is very very expensive.  Their headline number is that we spend about $10 trillion a year in "violence containment", which they define as "economic activity that is related to the consequences or prevention of violence… directed against people or property." For those scoring at home, $10 trillion is about 10% of the total value of stuff the world produces (the so-called Gross World Product).  For those of you who think only in Benjamins, it's 100 billion of them.

Their estimate is the result of a big adding-up exercise where they use existing estimates from the literature on how much each type of violence costs directly -- from what we spend to house and feed conflict refugees, to the economic cost of a homicide -- and add to them estimates of how much we spend to "contain" violence more broadly, which for them includes all military expenditure (more on that below).  The figure below shows their assessment of breakdown of the different costs, with the shares given by the exploding pie chart (yeah!) on the left, and the absolute values on the right. 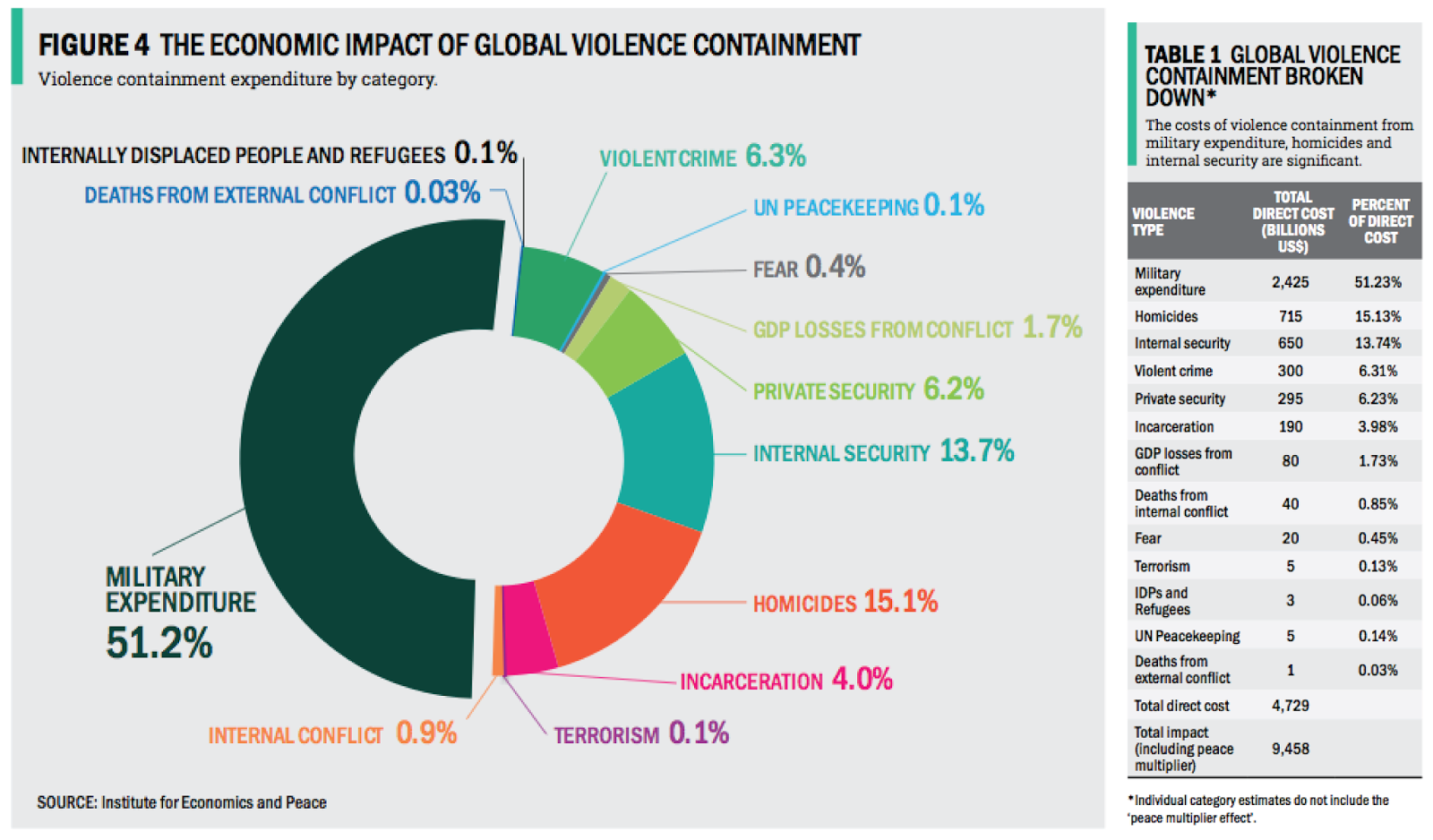 There are clearly some questions about what the authors have decided to include and not include.  For instance, it doesn't seem like military expenditure can just be thought of as a cost. Sure, with a fixed budget, increased expenditure on the military necessarily reduces the investments we could otherwise make, many of which could be higher return.  But this doesn't mean that investment in the military has no economic benefit.  Irrespective of one's feelings about military spending, the military employs a lot of people, both directly and indirectly, so this sort of expenditure has benefits as well as costs.

Then as you can see in the table on the right, to get from $5 trillion in direct costs to $10 trillion in total costs, they literally multiply the direct costs by 2.  The claim is that the economic spillover from reduced violence -- e.g. from investments made elsewhere with the money you save, and from people no longer having to protect themselves from violence -- is as large as the direct cost of violence.  This number seems to come out of nowhere.

Nevertheless, if we that military expenditure is actually a wash in terms of total costs, and assume that there is no multiplier effect, we still have a cost of violence estimate of $2.3 trillion dollars.  If you drop out the "private security" and "internal security" categories for similar reasons (e.g. they are employing people), you are down closer to $1.3 trillion dollars.  So call it $1 trillion dollars in annual costs of violence.  I.e., to be conservative, let's assume that the report was off by an order of magnitude.

So what of the economic costs of climate-induced increase in conflict?  For a quick back-of-the-envelope, we can combine this $1 trillion estimate with our earlier estimates on how conflict risk responds to increases in temperature.  We had calculated these latter estimates as standardized effects -- i.e. a percentage change in conflict per 1 standard deviation change in temperature or precipitation -- and came up with numbers between about 4% and 14%, depending on the type of violence.  And since we're not used to thinking of temperature changes in terms of standard deviations, we made the map below (Fig 6 in our Science paper) to show the projected change in temperature between 2000 and 2050, expressed as multiples of the historical temperature standard deviation at each location.

The number I get is just over $1.5 trillion, or a little over 1% of current Gross World Product. That is a large number.  As a simple calibration, it is about 1/5th of the total cost of climate change calculated in the Stern Review a few years back (which did not consider costs from violence).

Clearly there are a ton of assumptions that go into these sorts of calculations, but these order-of-magnitude exercises can be useful for getting a basic answer to the "should we care" question.  And even if this new report is off by an order of magnitude about the costs of violence and conflict, I think the answer to whether we should care about the potential costs of climate-induced violence is a simple "Yes".  These are big numbers.

Posted by Marshall Burke at 9:05 AM