The power of avocado

I woke up last Saturday to several emails and voice mails asking for my view on guacamole. That isn’t usually how my weekend starts. But it turns out that Chipotle issued some statement in their annual report about risks of price increases, and among them was avocado. I presume this is mainly related to the current drought, but then Chipotle wrote something about this being a possible trend and cited a paper we wrote nearly 10 years ago with some projections for avocado.

None of that would have amounted to much, but I guess it was a slow news day and reporters rarely pass up the chance to use “Holy Guacamole” in a headline (nor should they). Today I checked and a search for “avocado Chipotle” on Google News gives over 6000 results, ranging from the predictable to the fairly impressive “Guacapocalypse”.

The study we did looked at state level data and tried to infer climate sensitivity for a range of high value crops. Avocados were one that seemed to suffer with very high late summer temperatures. This was based on only a couple of hot years and so the uncertainties were quite large, as we reported in the study. We also did some follow up work with more data and more fancy statistics in what I consider a better paper. There we decided to focus on crops where the relationships were most robust, and that didn’t include avocado. But it did include some popular crops, namely the four shown below (figure shows distribution of projected impacts in terms of % yield, not including CO2 effects). Which makes me wonder what the best headline for a story on cherries would be? I’m sure Max has already thought of a few good ones. 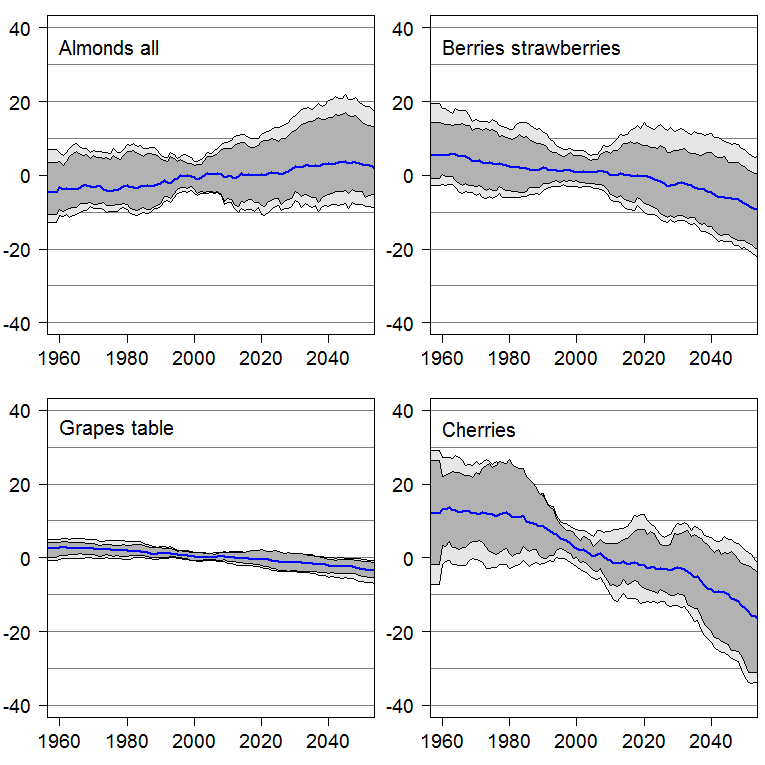 Maybe I’m over-analyzing (and by maybe, I mean almost definitely) but I think the episode demonstrates a few common things. First, it is very difficult to contrast current trends in crop yields or prices to what would have happened without anthropogenic climate change. Max’s last post discusses this issue, one he and I have been grappling with for years in our service for the IPCC. Should we expect more down years for avocado in the future? That’s not an easy question, certainly not one I’ve looked at enough for this particular crop to offer a firm answer, even if one was possible.

Second, the media has a bit of a tendency to exaggerate things. I assume I’m the first person to ever notice this. (That was sarcasm). Things are either a total non-issue or the end of the world, and nothing in between is newsworthy. That makes it tricky to communicate an issue like climate change where almost everything is somewhere between these two extremes.

Third, and probably most important, is that people really take what businesses say related to climate change risks very seriously. The shame is that I know a lot of businesses are convinced of the science and have thought a lot about risks posed by climate change, but they rarely make these concerns public. I recall sitting on a panel at a large agricultural company and was asked what the company could do to help society prepare for climate change. My answer was that they should not be so silent about the issue. They were the third agricultural company that year to tell me they believe the science, that they are concerned about the risks, but that they don’t dare talk publicly about it for fear of alienating customers who see climate change as a political issue.

As a bit of consolation for US readers, please know it is hard to find an avocado here in Australia for less than $3 a piece. So that extra $2 for guacamole at Chipotle is a real bargain. I hope there’s still some left when I get back!
Posted by David Lobell at 7:17 PM