Breaking down the pause

The only redeeming thing about long plane rides is the chance to catch up on reading and movies. Alas, my flight to Japan had no movies, and it was only eight hours, so I didn’t have time to finish reading Sol’s last G-FEED post.

But I was able to catch up on various papers I’ve been meaning to read, including a recent collection of short papers that Nature Climate Change put together related to the recent hiatus, or pause, in global warming since 1998. As readers of this blog will surely know, a lot of attention has been given to the lack of significant warming trend since 1998, aka “the pause”. (Not to be confused with an "awkward pause.”) I’ve normally viewed the pause as much ado about nothing, or at least very little, since you’d expect variation around the long-term trend and models have consistently shown a non-small probability for flat trends over a 10 or even 15 year period, even as longer-term trends are positive. So having not followed the conversation too closely, I was interested to catch up with these papers. Here are a couple of interesting lessons:

First, Gavin Schmidt and co-authors explain how a lot of the disparity between expected and observed trends is not necessarily due to natural variability, but instead to the fact that short-term forcings since 2000 are not what models had assumed. As they say “the influence of volcanic eruptions, aerosols in the atmosphere and solar activity all took unexpected turns over the 2000s. The climate model simulations, effectively, were run with the assumption that conditions were broadly going to continue along established trajectories.” But instead, all of these factors deviated in a way that caused climate to be cooler. In other words, the models weren’t the problem, but the assumptions used to force them were. They also emphasize that none of these factors should be expected to continue to cool climate much, and predict that “ENSO will eventually move back into a positive phase and the simultaneous coincidence of multiple cooling effects will cease. Further warming is very likely to be the result.“

Second, an interesting piece led by Sonia Seneviratne shows that trends in daytime extreme temperatures over land, arguably a more relevant measure in terms of climate impacts, haven’t slowed down at all (red line in figure below). Essentially, they object to the entire notion of a “pause.” 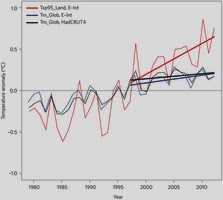 All of these papers on the pause also reminded me of a great book I recently finished – “Thinking Fast and Slow” by Daniel Kahneman. He talks a lot about loss aversion - how humans tend to dislike losses about twice as much as they like gains -  and how even small losses can be very annoying. One consequence is that for an identical putt, professional golfers will tend to try harder and make it more often if it’s for par (to avoid loss) than if for birdie (to get a gain). I’m sure that explains why I always miss birdie putts! Another consequence is that people are usually risk averse when it comes to gains (i.e. prefer to take $100 than flip a coin for a 50/50 chance of winning $200), but risk seeking when it comes to losses (i.e. prefer to flip a coin for a 50/50 chance of losing $200 rather than give $100, because $100 hurts almost as much as $200). This is compounded by another tendency humans have - to way overweight events that have low probability in their decisions. So even if there’s a very small chance of a “no loss” outcome, people will tend to take a chance hoping that outcome will happen, because it will be so much more pleasant than even a small loss, and because they think it’s more likely than it actually is.

All this seems like a pretty good description of many people's reaction to climate change. It might be a small deal or it could be really bad. We could maybe guarantee a small loss if we paid for a lot of mitigation and adaptation. Or we can roll the dice and hope for the best. After reading his book, it hardly seems surprising that people would opt for the latter. They do in all walks of life, and are worse off because of it. It is also hardly surprising that people will latch onto anything that seemingly justifies overweighting the probability of no loss, such as the pause. I'm not saying that either are the appropriate response to the problem, especially by institutions that should be less prone to these behavioral quirks, but it may help to partly explain people's fascination with the pause.

The pause has also highlighted for me how wide the full distribution of potential trends over a 10 year period is, and that includes the potential for very rapid warming. What will happen if warming rates in the next 10 years are at the other end of the distribution – other than, of course, people asking climate scientists why their models are too conservative? It’s a question I’ve been looking at with Claudia Tebaldi in terms of crop implications, which hopefully will be a paper in the not-so-distant future to blog about.