Yet more cleverness: getting ambient temperature data from cellphones


Accurate air temperature observations in urban areas are important for meteorology and energy demand planning. They are indispensable to study the urban heat island effect and the adverse effects of high temperatures on human health. However, the availability of temperature observations in cities is often limited. Here we show that relatively accurate air temperature information for the urban canopy layer can be obtained from an alternative, nowadays omnipresent source: smartphones. In this study, battery temperatures were collected by an Android application for smartphones. A straightforward heat transfer model is employed to estimate daily mean air temperatures from smartphone battery temperatures for eight major cities around the world. The results demonstrate the enormous potential of this crowdsourcing application for real-time temperature monitoring in densely populated areas.


They validate their technique in a few big cities around the world, and it looks pretty neat.  As shown in their Fig 2, which shows temperatures for London over a 4-month period and is reproduced below, raw changes in battery temperature are highly correlated with variation in ambient temperature (compare the orange line and black line, reported correlation r=0.82), and their heat transfer model is able to get the levels close to right (compare the blue dots with the black line). 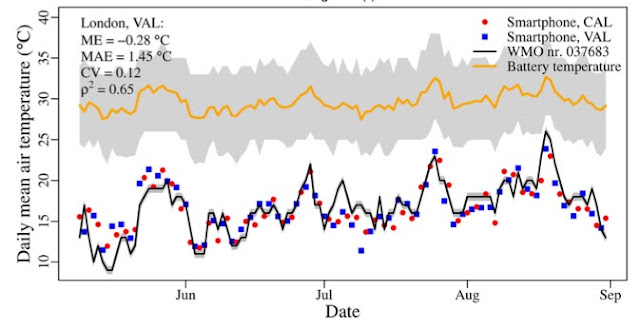 What we really want to know, of course, is whether this can also work in places where the weather-observing infrastructure is currently really poor (e.g. most of Africa), and thus were techniques like this could be extra useful.  It seems like there are a couple hurdles.  First, you need a lot of people with smartphones.  According to this article, smartphone penetration in Africa is currently around 20%, but Samsung (who might know) puts it at less than 10%.  Nevertheless, smartphone adoption appears to be growing rapidly (you can find them in just about any tiny rural market in western Kenya, for instance), and so this might not be such a limitation in a few years.  And something the authors worry about in colder and richer climes -- that their battery temperature readings are biased because people are in heated or air-conditioned buildings a lot -- is much less of a worry in places where people are outside more and don't keep their houses at a perfect 70F.

Second, to get temperature levels right, it appears that the authors have to calibrate battery temperatures in a given area to data on observed temperatures in that area -- which is obviously not helpful if you don't have observed data to start with.  But if all you care about is temperature deviations -- e.g. if you're running a panel model that is linear in average temperature -- then it seems like the raw battery temperature data give you this pretty well (see figure).  Then if you really need levels -- say you want to estimate how a crop responds to temperatures above a given threshold -- you could do something like David did in his 2011 paper on African maize and add these deviations back to somebody else's estimate of the climatology (David used WorldClim).

Given this, the authors' optimism on future applications seems fitting:


"In the end, such a smartphone application could substantially increase the number of air temperature observations worldwide. This could become beneficial for precision agriculture, e.g., for optimization of irrigation and food production, for human health (urban heat island), and for energy demand planning."

But hopefully the expansion of this technique into rural areas won't have to wait for observed data with which to calibrate their heat transfer model.  If that London plot above is representative, it seems like just getting the raw battery data could be really helpful.

Posted by Marshall Burke at 1:14 PM