The future of crop demand

It is common to hear statements about needing to increase food production by 70%, or even to double it, by 2050. In the past I’ve tried to avoid such statements, mainly because I hadn’t really dug into the sources behind them. But as part of prepping for a new class I’m teaching in the fall, I decided to take a closer look. And what I found, maybe not surprisingly, is a lot of confusion.

For starters, the baselines are often different, with some using 2000, some 2005-07, and some 2010. More importantly, the definition of “food” can be quite different, with some referring to cereal production, some to all calorie production, and some simply to the total value of agricultural output. And the studies use different assumptions about drivers of demand, like incomes or biofuel policies, so it’s often not clear how much differences are driven by assumptions in the models themselves vs. the inputs into the models.

Here’s a quick rundown of the common citations. First and foremost is the FAO, which produced the commonly cited 70% number. Last year they actually revised this down to 60% in their new projections, but not because the projected demand changed very much, but because they up-revised their estimate of actual output in 2006. The baseline for the FAO number is still 2006, so the 60% refers to an increase over a 44-year period. And the 60% refers to price-weighted aggregate of output, so that part of the 60% is simply a shift toward producing higher value stuff. Total cereal production only rises 46%, from roughly 2 to 3 billion tons per year. About two-thirds of that increase occurs by 2030. In terms of calorie consumption, global per capita consumption rises by 11%, and total calorie consumption rises by 54%.

The “doubling” statement, as far as I can tell, comes mainly from a 2011 paper by David Tilman and colleagues that said calorie demand would double between 2010 and 2050, and protein demand would rise by 110%. That was mainly based on extrapolating historical patterns of cereal and protein demand as a function of income, combined with projections of income growth. Coincidentally, doubling of production is also what we found in the baseline simulations we did for a climate adaptation analysis published earlier this year in ERL, and discussed in a prior post.

I won’t take time here to bore you with details of the methods in FAO vs. Tilman vs. others. But it seems a lot of the disparity is not so much the methods as the input assumptions. For example, FAO has world GDP per capita growing at an average rate of 1.4%, which they acknowledge as conservative. In contrast, Tilman has a global per capita GDP growth rate of 2.5% per year. Over a 40-year period, that translates to an increase of about 75% for FAO but 170% for Tilman! In our paper, we had a rate in between of 2% per year based on USDA projections. The reason we still get a doubling with lower income growth than Tilman is probably because we had a larger biofuel demand. (Note that my coauthors Uris Baldos and Tom Hertel have since switched to using income projections from a French group, which - maybe not surprisingly - are a little more pessimistic than the American ones.)  Now, global per capita growth rates only tell us so much, because what mainly matters for demand is how incomes grow at lower and middle income levels where people most rapidly increase consumption with higher income. Unfortunately, studies don’t usually report for the same sets of countries, and I’m too lazy to try to recompute. But the global numbers suggest pretty important differences at all income levels.

To me, it’s always useful to compare these projections to historical growth rates. Below I plot global cereal production from FAO since 1961. A couple of things are clear. First, production was about 150% higher in 2010 than 50 years earlier. Second, the growth rate appears pretty linear at a clip of roughly 28 million tons per year. A naive extrapolation gives an increase of 1.1 billion tons over a 40 year period from 2010 to 2050. For reference, I show what a 50% and 100% increase from 2010 trend levels would be. Obviously the 50% number (or the FAO’s 46%) are closer to this naive extrapolation than a doubling. 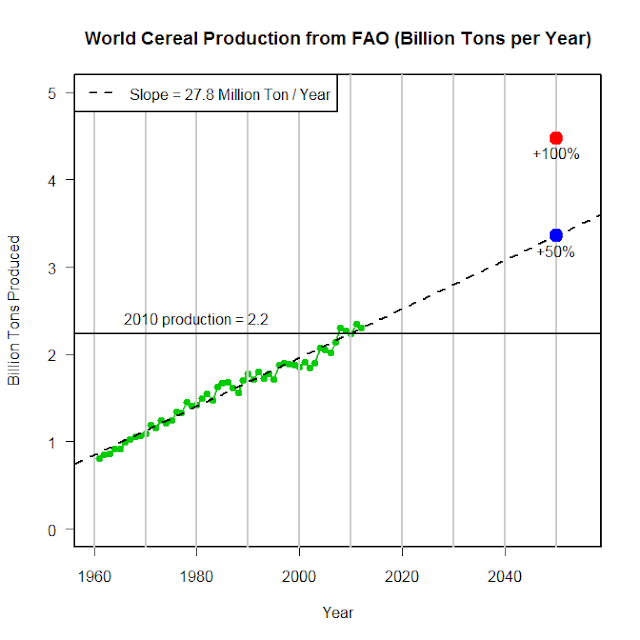 This isn’t to say that the doubling number is definitely wrong, but just that it would mean a significant acceleration of cereal demand, and/or a significant shift of calorie consumption away from cereal-based products. It would be really nice if someone could systematically explore the sources of uncertainty, but my guess for now is that income growth is a big part of it. Unfortunately, this means our hope for narrowing uncertainty is largely in the hands of economists, and we know how good they or anyone else are at predicting GDP growth . But for those who work mainly on supply side questions, it’s mostly good enough just to know that demand for crop production will rise by 50% or more, because even 50% is a pretty big challenge.

(Note: for anyone interested in a summary of an unrelated recent paper on extreme heat, see here. And for an exchange we had about adaptation in the US see here. Wolfram told me a blog about the latter is coming, but as I told him, so is Christmas.)
Posted by David Lobell at 10:13 AM