This week marks a milestone of sorts. The carbon dioxide (CO2) levels measured at Mauna Loa in Hawaii have passed 400ppm for the firsttime. For all of the concerns and talk about global warming over the years, the bottom line is there have been very few successes yet at the scale required to slow down global emissions rates. If anything they are going faster than expected.

There have been tons of studies on potential mitigation strategies, and a clear message that multiple changes are needed to make a real dent in CO2 growth rates. For example, see here for a nice recent update by Steve Davis and colleagues on the concept of mitigation "wedges", where a wedge is enough to avoid 1 Gt of C emissions per year. The short story is that lots (about 9) of wedges are needed just to stabilize emissions as energy consumption grows, and another 10 are needed to reduce emissions enough to stabilize climate (in the figure below, "hidden" wedges refer to progress that is expected based on business as usual improvements in the emission intensity of economic growth). 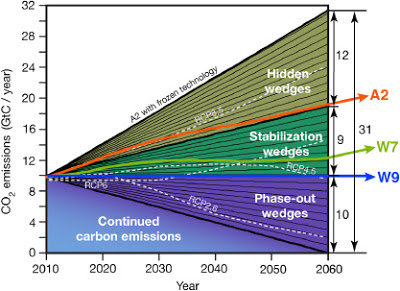 One thing that has always puzzled me about mitigation discussion is how agriculture is treated. It's usually included, but mainly in the role of sequestering carbon in the soil, or reducing nitrous oxide and methane emissions. Not that these aren't worthwhile, but I think this emphasis tends to miss a more fundamental role -- demand for agricultural land drives much of deforestation, which remains a substantial (~10%) driver of global emissions.

As people search for investments to slow climate change, it seems useful to think about how to reduce demand for agricultural land. This roughly translates to a question of how to keep agricultural prices low enough that the incentives to clear new land don't outweigh the costs. On that, the evidence is pretty clear that investments in research and development for agriculture is a good bet. In an important report in 2001, Phil Pardey called agricultural R&D “slow magic” because it was both powerful but relatively slow to materialize. More recently, Keith Fuglie has provided some further evidence on the benefits of capacity to generate and deploy new technologies – countries with greater capacity consistently have higher growth in total factor productivity (TFP). 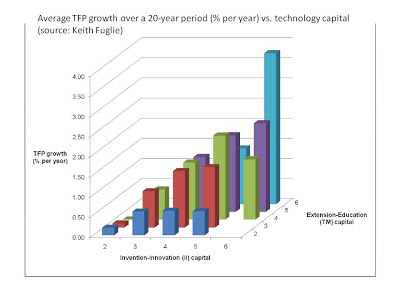 So investments in R&D Help, but do they really help enough to matter in terms of lowering land use change and slowing emissions? First, in the context of emissions, it's important that the technologies and practices that emerge from R&D are improving yield, and not just overall productivity of inputs. For example, reducing inputs to achieve the same yield is great for many reasons and will be measured as a rise in TFP, but will actually tend to increase land clearing because it lowers production costs without changing yield. To folks like Fuglie, who are mainly concerned about TFP and associated changes in prices, yields are a secondary issue. But in the context of land use and emission rates, it is yield and not overall TFP that is most critical.

Second, it’s possible that yield improvements lead to counteracting "rebound" effects that reduce their effectiveness in lowering emissions. For example, if yield increases are localized in land rich regions, they will tend to increase profits, raising the incentives to clear. Or if demand is elastic with respect to prices, so that small price reductions lead to higher demand, then total land savings are likely to be small.

Capturing all of these requires a reasonable model of agricultural markets and land use. In recent work with Uris Baldos and Tom Hertel of Purdue, we made an attempt to quantify how much mitigation benefit you get from investment in agriculture. In this case, we were focused specifically on investments related to climate change adaptation. To make a long story short, we estimated that broad-based investments in yield improvements reduce emissions at a cost of roughly $15 per metric ton of CO2. There's lots of assumptions embedded in that number, and we try our best to look at a full range of possible conditions at each link in the chain, coming up with a 95% confidence interval of $11-$22 per ton (see full paper here). Even the high end is pretty competitive with other mitigation actions. So it seems like “slow magic” may be a good mitigation strategy after all.
Posted by David Lobell at 4:38 PM