Getting trustworthy data on rainfall and temperature over space and time is really critical to science across a range of disciplines. Sadly, the world's basic weather monitoring network has been in serious decline over the last few decades. Here is a depressing plot from a recent paper by Lorenz and Kuntsman showing the decline in the number of reporting weather stations around the world: 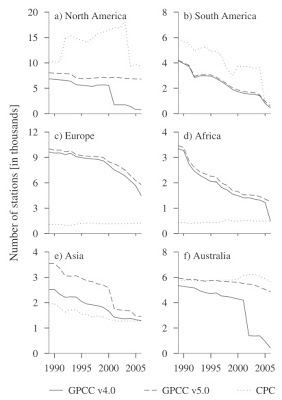 As the number of stations declines, our estimates of how much rain fell in a given area at a given time gets worse and worse, and this can create really bad problems for applied social scientists.  Rainfall and temperature typically show up as independent variables in social scientists' statistical analyses.  If these variables are measured with error and this error is "classical", i.e. uncorrelated with the "true" underlying thing being measured, then your estimates of the effect of these variables on the outcome of interest get biased towards zero.  That is, you (perhaps erroneously) conclude that rainfall or temperature had no effect -- or a much smaller effect -- on crop yields or infant mortality or conflict than what actually occurred.

There are some work-arounds to having limited gauge data.  One is to use "reanalysis" data, in which some kind climate scientists sitting in a basement somewhere take the available observations and use them as inputs to a climate model, spitting out a physically consistent record of weather over time.  Another option is to use data from satellites, but satellites appear to measure rainfall better than temperature, and the available satellite output is often at a fairly coarse scale (e.g. 200km grids).  A third is to use interpolations of the gridded data, which imputes missing observations using a weighted average of nearby observations.  This works well when there are nearby observations, but the station density is so low in places like Africa that interpolation might introduce substantial error.

Enter a fourth option.  Cell phones (and cell phone infrastructure) can apparently be used to do more than update your Facebook status.  From a new paper in PNAS this week:

Accurate and timely surface precipitation measurements are crucial for water resources management, agriculture, weather prediction, climate research, as well as ground validation of satellite-based precipitation estimates. However, the majority of the land surface of the earth lacks such data, and in many parts of the world the density of surface precipitation gauging networks is even rapidly declining. This development can potentially be counteracted by using received signal level data from the enormous number of microwave links used worldwide in commercial cellular communication networks. Along such links, radio signals propagate from a transmitting antenna at one base station to a receiving antenna at another base station. Rain-induced attenuation and, subsequently, path-averaged rainfall intensity can be retrieved from the signal’s attenuation between transmitter and receiver. Here, we show how one such a network can be used to retrieve the space–time dynamics of rainfall for an entire country (The Netherlands, ∼35,500 km2), based on an unprecedented number of links (∼2,400) and a rainfall retrieval algorithm that can be applied in real time. This demonstrates the potential of such networks for real-time rainfall monitoring, in particular in those parts of the world where networks of dedicated ground-based rainfall sensors are often virtually absent.


This seems potentially really cool, particularly for places like Africa where the cell network is expanding incredibly fast.  Here's a plot of how they did in the Netherlands, comparing their cell-tower derived estimates (y-axis) to what you get off radar (x-axis). 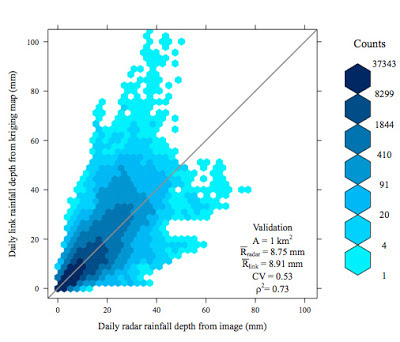 I'm not sure why they didn't compare against rainfall gauge estimates (have the Dutch stopped operating their rainfall stations too?), but nevertheless this doesn't look too bad.  Really small average difference between the two measurements, and a high correlation.  It's pretty much impossible to generate a similar plot over a region of interest in, say, Africa, comparing what you get from interpolated station data or satellite data to what the "true" observation is on the ground, but I would be surprised if it looks this good.

The authors do note that cell phone towers in the tropics tend to operate at a lower frequency, which "can increase errors in rainfall estimates due to the increased nonlinearity of the relationship between rainfall intensity and specific attenuation at lower frequencies".  But given the low baseline number of weather stations in much of the tropics, and the fact that the number of stations is getting even smaller, it seems like this sort of tool might have a lot of potential.

Hopefully, as the authors say, "this research report will contribute to persuade cellular communication companies worldwide to provide received signal level (RSL) data from their radio link networks free of charge for both research purposes and other applications of societal relevance."  It would be really neat if they could show how this works in some place with slightly sparser cell coverage.  Oh, and it would be nice if they could get us temperature too.

Posted by Marshall Burke at 2:15 PM