In a recent post I wrote about why rainfall is sometimes given too much credit for variations in crop production. Or, put differently, temperature deserves more credit than it often gets. A paper we have out this week delves into the reasons for this. Below is a brief background and summary, but see full paper here.

As background, there are now several studies showing close correlations between crop yields and temperature, in both rainfed or irrigated areas. More specifically, we now see that a lot of these correlations are driven by the tails of the temperature distribution – more very hot days means lower yields. Those of you familiar with our blog will know we often represent this effect by summing up degree days above some threshold, like 29 or 30 °C. See posts here, and here.

But correlations don’t tell us much about mechanisms of causation. And as a result, many people are wary about using correlations to project future impacts. So why might hot days in particular be so important? Agronomists are usually quick to talk about the key time of flowering when some really hot days can spell disaster. This is confirmed by many experimental studies, including one recent one here. But there are other things that could be going on in farmers’ fields in addition to this. One is the fact that hot air can hold more moisture, so that hotter days tend to have higher vapor pressure deficits (VPD). When air has higher VPD, plants lose more water per amount of CO2 uptake, which lowers their water use efficiency. The response of most plants is to then slow down growth, which avoids losing too much water during the parts of the day where efficiency is lowest. Tom Sinclair, among others, has a boatload of interesting papers on this dynamic and the tradeoffs involved with selecting varieties that slow down more or less under high VPD.

Now to the study. We wanted to see if the VPD effect could explain the observed importance of hot days for corn in the U.S. So we took an Australian crop model, APSIM, that handles the VPD effect and simulated some long time series of yields at different locations. We then look at whether the model can reproduce the observed relationships, and the match was quite good: 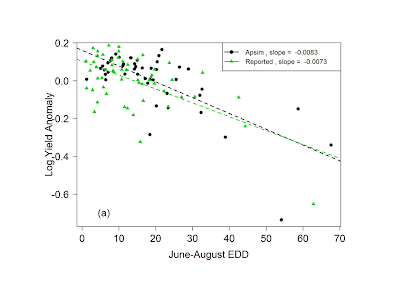 We then look at some diagnostics in the model to confirm that it’s high VPD causing growth to slow, which causes lower yields. Then, to be sure it is not just that hot days or years tend to happen when rainfall is low, we artificially manipulate temperature or rainfall one at a time, and see how the model responds. The figure below shows the change in water stress (lower values on the y-axis mean higher amounts of water stress) for 3 key months for corn (July being the most important for final yield). This shows that a warming of 2°C causes a much bigger (3x) increase in water stress than a drop of in-season rainfall by 20%. 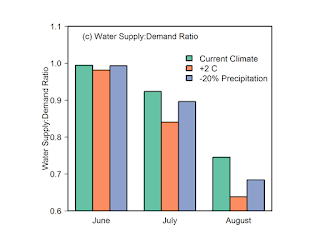 Why does this matter? First, it suggests that a lot of the effects of extreme heat (at least for this crop, in this region, in today’s climate) are related to drought stress. So when the media refers to the big drought, that is technically correct (at least in this case). But it’s important to be clear what we mean by drought – we don’t necessarily mean low rainfall (a common meteorological definition of drought), or even low soil moisture (a common definition of “agricultural drought”), but we mean a more agronomic definition of drought, such as “not enough water to grow as fast as a plant can”. The key is that water stress is not just about water supply to the plant, but about how much water it has relative to how much water it needs to maintain growth rates. The “needs” or water demand part depends on VPD, and hotter days on average tend to have higher VPD (and extended heat waves tend to have much higher VPD).

Second, it implies that efforts to adapt to warming in U.S. maize should probably, at least for the near future, focus on dealing with water stress associated with high VPD, rather than, say, the direct effects of heat damage during flowering.

One thing we didn’t have the horsepower to do for this study would be to repeat the analysis with other types of crop models, most of which handle water stress slightly differently than APSIM. That would tell us how many models that have been used to project climate change impacts on U.S. agriculture are actually getting the key process right. It’s the type of model comparison that hopefully AGMIP will tackle – not just comparing projections of different models, but seeing how well they perform in reproducing historical responses to extreme heat.
Posted by David Lobell at 11:39 AM