Nonlinearities and exposure to extreme heat: what do we know?

Anomalous dry and hot conditions across the US, as well as recent well-publicized research, have amplified the discussion over how human affairs might be affected by changing patters of exposure to extreme heat.  You hear the word "non-linear" thrown around a lot in these discussions, so we wanted to clarify some of the things we know (and don't know) about non-linearity in this setting.

Boiled down even further:  extreme heat is bad under current climate, a few degrees of extra warming will increase exposure to extreme heat dramatically in many places, and this could have very large negative impacts on outcomes that folks care about.

Now here's what some of the science says about these points.

1.  Extreme heat exposure tends to increase non-linearly with average temperature.  This can be pretty easily visualized by looking at some counties in the US.  I pulled data for three corn-growing counties in the US (Sioux County in Iowa, Calhoun County in Georgia, and Clay County in Minnesota), and plotted how exposure to extreme heat would change if temperatures increased anywhere between +1C and +7C.  Extreme heat as defined here is uses the agronomic notion of "growing degree days", and essentially measures the amount of time an area is exposed to temperatures above a given threshold, set here to 29C.  As discussed below, temperatures above 29C have been shown to be particularly harmful for agricultural productivity.

The left panel in each plot shows how much time corn grown in each county spends at different temperatures.  The grey line is the average in current climate (the last three decades), and the grey shaded area is the amount of time spent above the magical 29C threshold.  The colors show what happens as you increase average temperatures by +2C, +4C, or +6C.  Particularly in the places that start out cooler (Clay County in Minnesota), small initial increases in temperature can lead to big increases in exposure to temperatures above 29C. 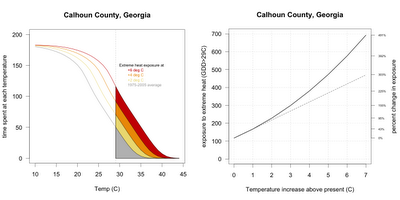 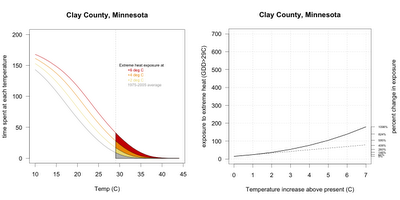 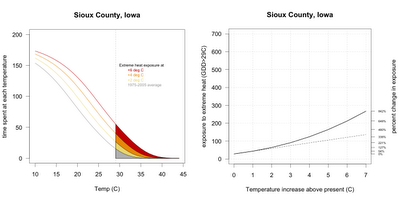 2. Many outcomes we care about respond very negatively to extreme heat.  This is a very active topic of research, and the other venerable posters on this blog are at the forefront of research on this topic, but let me briefly summarize some findings to date.

Effects of extreme heat on agricultural outcomes are now increasingly well documented.  Here's a summary plot from Wolfram and Michael's 2009 PNAS piece, showing how the main US field crops respond to hot temperatures.  For both corn and soy, things fall off pretty dramatically above about 29C.

Importantly, though, this is not showing a non-linear response to extreme heat.  The paper shows that modeling the yield response to extreme heat linearly does just fine. But this response is still really negative:  an extra day spent above 29C (relative to spending it at around 29C, where corn and soy are happy) reduces end of season yield by about 1%.  This is huge effect.

David Lobell and colleagues tell a very similar story looking at maize in Africa:  yields respond roughly linearly to extreme heat, and the effect size is almost exactly what Wolfram and Michael find in the US.

New findings outside agriculture are eerily similar.  Sol shows in a 2010 PNAS paper that non-agricultural economic output in the Caribbean also drops off quickly above 29-30C, and a recent paper by Graff Zivin and Niedell shows a similar dropoff of US labor supply above 29C in industries particularly exposed to climate (construction, agriculture, mining, transportation, etc).  Sol has a nice blog post on this.

Again, none of these studies appear to document non-linear responses to extreme heat.  Instead, the take-home from all of them is that outcomes respond very negatively (if perhaps linearly) to increased exposure to extreme heat.

The appropriate adjective to affix to "non-linear" in this setting ("mildly"? "highly"?) is perhaps in the eyes of the beholder.  Here is a plot of how Wolfram and Michael's 2009 paper predicts that corn yields will respond to increasing amounts of average warming (I just grabbed the coefficients and standard errors from their appendix Table A5): 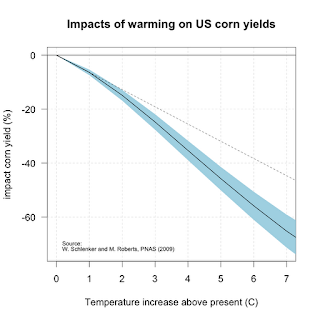 The dotted grey line again shows the impact trajectory if every additional degree of warming was like the first +1C of warming - the poor man's linearity.  The actual predicted impacts are well below this line starting at about +2C, showing that the responsiveness of US corn yields to temperatures is [fill in preferred adjective] non-linear.  I'd imagine the other findings in (2) above would look about the same.

A final word of caution is probably in order.  These empirical studies do a good job of capturing responses to extremes that we've seen in the past.  Unavoidably, they do less good of a job imagining how outcomes might respond to future extremes that we haven't yet experienced.  It could be that outcomes indeed respond non-linearly to these changes in extremes, instead of responding non-linearly just to changes in averages.  If so, this will probably only make a bad story worse.
Posted by Marshall Burke at 4:47 PM

[This is a guest post by Jonathan Proctor , a Doctoral Fellow at the Global Policy Lab and PhD candidate in the Ag and Resource Econ depart...