High temperatures cause violent crime and implications for climate change

I've posted about high temperature inducing individuals to exhibit more violent behavior when driving,  playing baseball and prowling bars.  These cases are neat anecdotes that let us see the "pure aggression" response in lab-like conditions. But they don't affect most of us too much. But violent crime in the real world affects everyone. Earlier, I posted a paper by Jacob et al. that looked at assault in the USA for about a decade - they found that higher temperatures lead to more assault and that the rise in violent crimes rose more quickly than the analogous rise in non-violent property-crime, an indicator that there is a "pure aggression" component to the rise in violent crime. 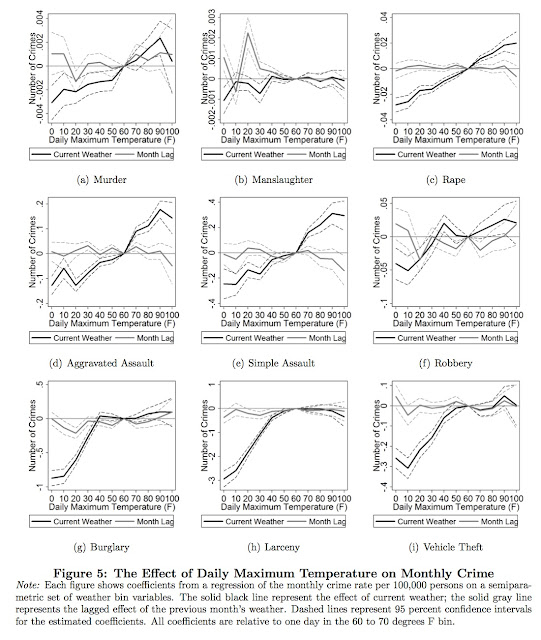 Note that all crime increases as temperatures rise from 0 F to about 50 F.  It seems reasonable to hypothesize that a lot of this pattern comes from "logistical constraints", eg. it's hard to steal a car when it's covered in snow. But above 60 F, only the violent crimes continue to go up: murder, rape, and assault.  The comparison between murder and manslaughter is elegantly telling, as manslaughter should be less motivated by malicious intent.

Ranson goes on to make projections about the expected effect of climate change:

This is pretty serious stuff. Ranson also shows that these effects haven't changed much over time, so the prospects for adaptation may be low. And there's no reason to believe that this relationship, which is probably neuro-physiological, doesn't hold outside of the USA.