Last week at AGU I gave a talk about the lessons of the US corn harvest in 2011 and 2012, both of which were below trend line (see figure). That got me thinking a little more about what to look for in 2013. The obvious point is that it is likely to be better than 2012, because it can’t get much worse. But that’s not too insightful, it’s like saying that Cal’s football team will be better next year, since they were so bad this year (By the way, welcome to Max Aufhammer, our newest blogger! With Wolfram’s move to Berkeley that brings our Cal contingent up to 3. I sure hope I don’t say anything to offend them.) 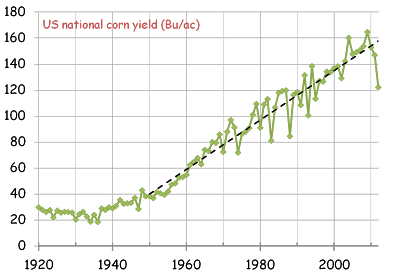 As we’ve talked about in other posts, the summer of 2012 might be considered the normal in a few decades, but not now. And some recent work from Justin Sheffield and colleagues in Nature argues that drought trends globally, and in North America, are not significantly positive if calculated properly (which contradicts some earlier work). We can leave aside for now the question of whether soil moisture trends are the best measure of drought exposure if one cares about corn yields (though a good topic for a future post), and simply say that conditions in 2012 were well below trend.

This means we’d expect next year to be closer to the trend, and that seems to be the overriding sentiment of markets. As Darrell Good over at farmdoc daily explains “In the past five decades, extreme drought conditions in the U.S., like those experienced in 2012, have been followed by generally favorable growing conditions and yields near trend values.”

But two things work against this tendency to revert to the mean. First, the drought still persists throughout much of the country, as seen at UNL’s drought monitor site.  As Good goes on to say, “current dry soil moisture conditions in much of the U.S. and some recent forecasts that drought conditions could persist well into next year have raised concerns that such a rebound in yields may not occur in 2013.” In other words, if the Corn Belt does not get a wet winter and/or spring, expect prices to start climbing again.

Second, though, is that good initial moisture does not eliminate the chance of drought during the season. There’s an interesting piece by folks at the National Climate Data Center (NCDC) in the AGU newsletter I got today (it was actually published Nov. 20, but it takes about 3 weeks for me to get it!). They note that the 2012 was not like previous droughts in the 1930’s  and 1950’s, or even 1988, in that it was very much driven by high temperatures rather than low starting moisture. As they say:

“For example, at the end of February in both 2011 and 2012 the national PDSI (calculated using the observed monthly mean temperature and precipitation averaged across the contiguous United States) was 1.2 (mildly wet) and –2.5 (moderate drought), respectively, compared to 1934 and 1954 of –5.7 and –4.6, respectively.”

This is also shown pretty effectively in an animation by climate central. So the high temperatures in recent years have made drought come on much more quickly than usual. As the NCDC piece says “By the end of September, every month since June 2011 had above normal average temperatures, a record that is unprecedented.” That's 16 straight months of above normal temperatures!

So my seat-of-the-pants guess is that next year’s yields are likely to still be below trend line (which would be at around 160 bushels/acre). Obviously lots of things could push it above trend line (including changing the definition of the trend!), and it’s way too early to have much confidence about how 2013 will end up. But following Sol’s lead on the Sandy damage prediction, I’ll go out on a limb (his mean was too low by a factor of two, but the true damage was within the confidence interval!). And to pair a risky bet with a safe one, I’ll also predict Stanford wins big at the Rose Bowl.
Posted by David Lobell at 1:22 PM