What poop tells us about the social impacts of climate change

A growing literature in paleoclimate and archeology explores the extent to which past fluctuations in climate have shaped the evolution of human societies.  These papers get to tackle pretty sexy topics:  did climate help cause the collapse of the Maya?  Is climate implicated in dynastic transitions in China? How about in the fall of Angkor Wat?

That a lot of these papers are answering "yes" to the question of whether climate is implicated in large historical social upheavals could tell us something important about the impact of future climatic changes on social outcomes.  But there are a few things you might worry about in this literature.  One is that the studies are actually measuring what they say they're measuring -- i.e that they're picking up meaningful variation in human activity, and that changes in societies and in climate happened when they say they did.  Most of the papers published that you see on these topics spend most of their time convincing you that this is the case, and given my mere hobbyist's understanding of paleolimnology I have to take them at their word.

The second concern is one that is more familiar to folks that are used to running regressions:  can we say with certainty that the variations in climate are causally linked to the socioeconomic variation of interest?  The hard part with these papers is that they're often dealing with one-off events -- e.g. the collapse of the Maya -- that don't give you the repeated observations you need to carry out the typical statistical tests.  Basically, you'd be worried that even though the collapse event you measured was coincident with a large climate shock, by chance something unobserved might also have happened at the same time that in fact caused the collapse.  Given this, you might be worried that these studies are looking under the proverbial lamppost for the proverbial keys: we'd like to observe the universe of all climate events and all collapse events over time, but instead we focus on a few iconic ones.

A new paper in PNAS helps overcome some of these concerns. D'Anjou and coauthors use coprostanol concentrations (Wikipedia:  chemical compounds found in fecal matter of higher order mammals - i.e. poop) that they dug up in a Norwegian lake to estimate the variation in local human activity in the nearby area over the last 2000 or so years.  They then compare this to existing reconstructions of local summertime temperature, which is the time of year when agriculture would have been possible.  The nice thing about their paper is that they have a lot of observations of the same place over time, and so can run some of the basic statistical tests you often want to see in these papers (and can't).  The other nice thing is that poop appears to be a much better indicator of human activity that many of the proxies used in the past, which could have been directly affected by climate (e.g. charcoal from fires, which could have been manmade or could have risen naturally as temperatures changed).

Here is the money plot comparing poop and temperature (their Figure 5): 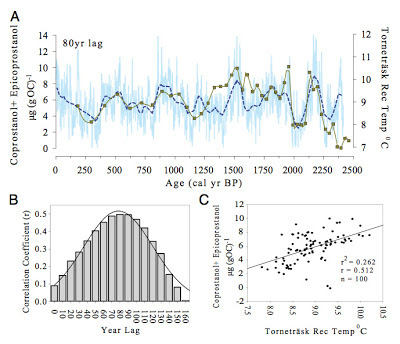 While there are a couple things you can still complain about -- e.g. you probably want to see Panel C as a plot of the time-detrended data -- this to me is one of the more convincing relationships that has shown up in these Paleo papers.  As in other studies looking at cold regions, they show that human activity responded strongly and positively to warmer temperatures: drops of ~4C caused total abandonment of (poop-related) human activity in the region.

While both the broader welfare effects and the modern implications of this and related studies are not immediately obvious (did people die or just migrate south? what do Iron Age societies' sensitivities to climate imply for modern societies?), the methodological differences between this and most of the past studies is to me a nice contribution.  And hopefully the grad students who had to dig up the poop got a PNAS paper out of the deal...
Posted by Marshall Burke at 3:09 PM