Global hunger: down but not out


A recent revision of the FAO's calculations on how many hungry people there are in the world has garnered some attention, not least because the FAO seems to have backed off their earlier headline- and funding-generating claim that high food prices and the global economic downturn had resulted in there being over 1 billion people hungry in the world.  The roundness and bigness of that number was certainly shocking and galvanizing, but what was perhaps more worrying at the time was the implication that earlier gains in reducing the number of hungry were being rapidly reversed - that hunger was "spiking" and that there was a serious crisis underway.

FAO's revised numbers, out in their annual State of Food Insecurity, tell a somewhat different story.  See the plot below, which is pieced together from the last three SOFI reports. The total number of hungry is now about 850 million - below a billion but still a debacle by any normal standard - but the updated numbers (shown in blue) now completely wipe out the highly-publicized food crisis spike of 2008-2010. Instead, it looks like there were more hungry people in the world in the 1990s, but that this has been more or less steadily improving ever since - with some leveling off in the last half-decade. The take home from these numbers:  we had a worse starting point, but much more progress since then and no big spike. 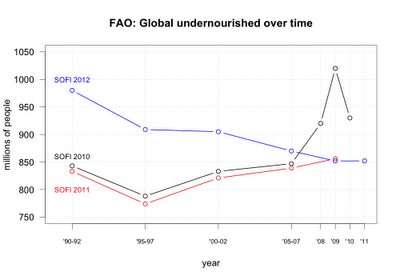 So what happened? Why the progress, and where'd the spike go? Calculating the number of hungry in the world is not an easy task.  The way the FAO does it is to combine population estimates for a given country (which we know pretty well) with estimates of dietary requirements for people in that country (based on anthropometrics, which we know decently well), with estimates of calorie availability.  This last part is where things get tough.  What the FAO does is to (try to) use household survey data to get an estimate of the distribution of consumption within a country, and then because these data are not available every year, use broader indicators of food availability (e.g. data on country level production and trade) to shift this distribution around.  In this technical note, they suggest that the revision had a little to do with better estimates of calorie distribution across households (which reduced estimates of the number of hungry 2008-2010 by about 60million), and a lot to do with better accounting for food losses and wastage (which increased the number of hungry in each period by about 125 million).

This to me explains why the levels went up, but does not really explain where the spike went.  In the 2012 SOFI, the authors explain:

"The methodology estimates chronic undernourishment based on habitual consumption of dietary energy and does not fully capture the effects of price spikes, which are typically short-term. As a result, the prevalence of undernourishment (PoU) indicator should not be used to draw definitive conclusions about the effects of price spikes or other short-term shocks. Second, and most importantly, the transmission of economic shocks to many developing countries was less pronounced than initially thought."

This seems a little weird, since basically the same methodology was used to show a huge hunger spike on account of the 2008 price rise.

In any case, it was likely there was (and is) still a hunger spike.  What of course you can't show on that plot is the counterfactual - what hunger numbers would have looked like had there been no economic downturn and food price increase.  There is plenty of evidence from other sources, including good micro work by folks at the World Bank, that price spikes in 2008 and again since mid-2010 have pushed 50-100million people below the $1.25 poverty line.  Hunger is of course different than poverty, but they are closely related - and this makes the FAO revision again confusing since it suggests that things were getting worse for a lot of people.

Good household survey data are a critical component to any adding up of the number of hungry, and if you had these surveys every year and in a bunch of countries, you would know a whole lot more about how much people are eating and how much they are hurt by higher food prices.  And there are many other (potentially much more clever) ways to use household expenditure data to get at hunger without adding up every single calorie consumed by the household.

The FAO seems to realize this.  In their technical note on the updated numbers, the FAO notes that:

"If nationally representative surveys collecting reliable data on habitual food consumption were conducted every year and could be processed in a timely and consistent manner throughout the world, then a simple head-count method, based on the classification of individuals, could be used. Until then, a model based estimation procedure, such as FAO’s, is still needed."

What I don't understand is why the FAO is not already doing these surveys.  Calculating the number of hungry people in the world (and its different regions) would seem like one of - if not the - most important task the FAO has on its annual to-do list, and something that might be worth throwing some money at.

FAO's annual budget is $1 billion USD (which as noted by this website equals the "cost of six days of cat and dog food in nine industrialized countries").  Lets say you wanted to do annual household surveys in 100 poor countries.  A good rule of thumb for doing surveys in poor places is that it costs about $25 to survey one person, inclusive of all costs.  So for $100k, you could survey 4000 people, which is a decent sized national survey.  So doing these surveys annually in 100 poor countries would cost $10million, or 1% of FAO budget.  (Initial survey costs might be higher, but once you've paid the fixed costs of getting together a survey team, costs over time would go down..)  And with modern electronic data collection methods, you could collect, aggregate, and analyze this data pretty quickly - which is not to say that doing surveys is easy, but that this seems like a fixable problem. Furthermore, the much, much richer World Bank is already doing a bunch of these surveys - the LSMS - so presumably would be willing to go halvsies.

Until they do so - and given the large differences in the what the poverty numbers and the hunger numbers seem to say about the food crisis -  it's not obvious that we're better off trusting the new estimates of the global number of hungry a whole lot more than the old ones.  Either way, there are a whole lot of hungry people in the world, and high food prices do not appear to be doing them any favors.