Climate impacts research is getting real

A few recent examples of our research getting out of the ivory tower and into the real world. This came up in a recent seminar I teach, so it seemed like others might appreciate the update.

1. The NYT sent some journalists to India to do a story following up on Tamma Carleton's recent work on climate and economic drivers of suicide in India.  This is powerful and humanizing work by the Times making hard-nosed numbers appropriately real and heartbreaking. Some of the striking one-line quotes they obtained from personal interviews:


"I go without food more days than I eat"

"If I were to take out any more loans, the interest would grow, and my whole family would be forced to kill themselves."

2. Last week the US Government Accountability Office released to congress the report Climate Change: Information on Potential Economic Effects Could Help Guide Federal Efforts to Reduce Fiscal Exposure. The report drew heavily form the American Climate Prospectus that we published a few years ago and our recent paper on US costs of warming. The GAO summary concludes:


Information about the potential economic effects of climate change could inform decision makers about significant potential damages in different U.S. sectors or regions. According to several experts and prior GAO work, this information could help federal decision makers identify significant climate risks as an initial step toward managing such risks. This is consistent with, for example, National Academies leading practices, which call for climate change risk management efforts that focus on where immediate attention is needed. The federal government has not undertaken strategic government-wide planning to manage climate risks by using information on the potential economic effects of climate change to identify significant risks and craft appropriate federal responses. By using such information, the federal government could take an initial step in establishing government-wide priorities to manage such risks.

3. Trevor Houser and I recently estimated the potential long-run economic consequences of Hurricane Maria on the economic growth of Puerto Rico and published an op-ed explaining the issue and putting the event in context. Basically, I ran my LICRICE model to compute wind exposure across the island, which totals 123 mph max wind speeds on average across the entire territory. For a territory of this size, especially in the Atlantic, this is unprecedented in my data. 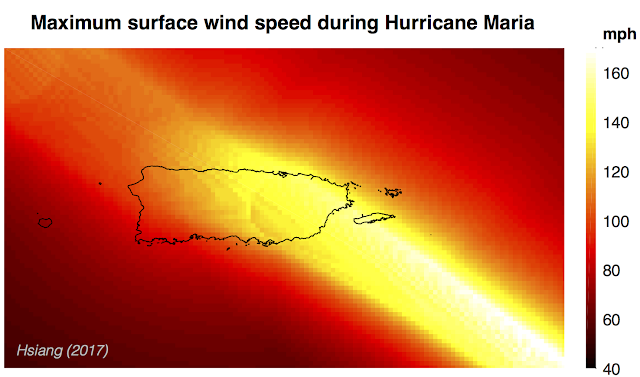 Then we applied these numbers to the results of work with Amir Jina on the macro-economic effects of these storms. If you were take central estimates from our benchmark model, the picture is a 21% drop in GDP per capita, relative to trend, over the next 15 years. Based on the low pre-Maria growth rate, we estimate that this storm undid roughly 26 years of growth in under 12 hrs. As stated in the op ed

"Almost nothing on the planet, short of nuclear weaponry, destroys economic value as rapidly as a mega-hurricane." 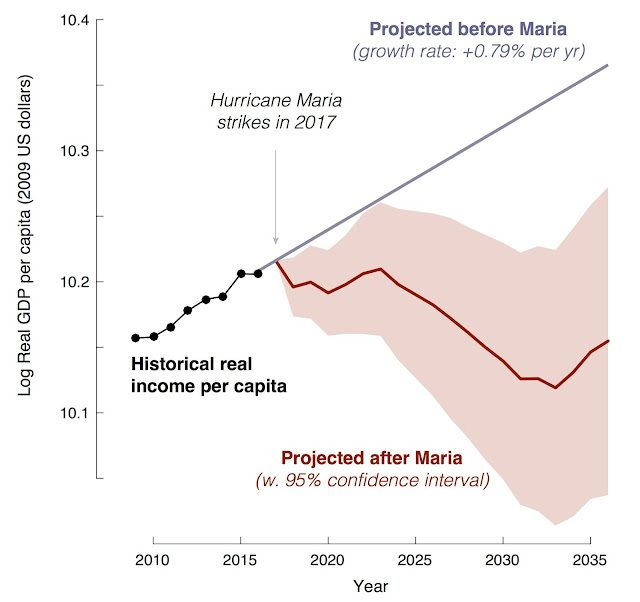