Eoin McGuirk and I have a new NBER working paper out that (we argue) sheds important new light on the economic origins of conflict in Africa.  This is a topic that has received a lot of scrutiny over the years, but one which has remained tricky to sort out empirically, as conflict could be both a cause and a consequence of deteriorating economic conditions.

Our approach is to utilize plausibly random variation in local-level food prices induced by (1) variation in global food prices and (2) variation in what crops are grown and consumed in different regions across Africa.  There's a lot of variation in both, which is helpful.  For instance, here's a plot from the paper of where some of the main crops in Africa are grown, with the colors showing the percentage of each cell planted to different crops (using the SAGE data): 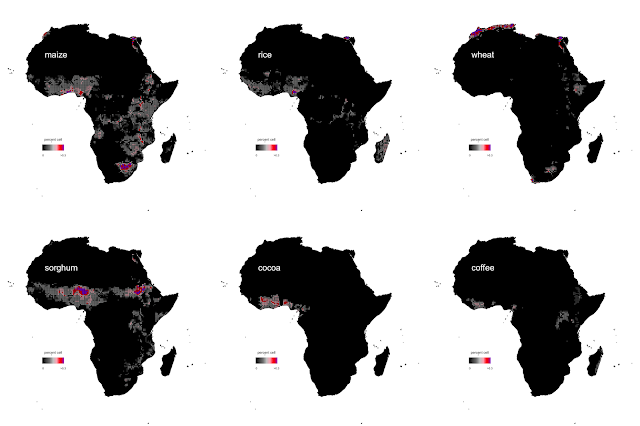 We find strong evidence that changes in economic conditions induced by food price movements have substantial effects on conflict across the continent.  Eoin wrote a nice summary of the paper for the IGC blog, which I shamelessly copy below:

Over one million people have died from direct exposure to civil conflict in Africa since the end of the Cold War alone. What causal role do economic factors play in this tragedy? We study the effect of world food prices on violence across the continent, finding that the impact depends on both the type of conflict and whether a region mainly produces or consumes food.

The role that economic conditions have in shaping conflict risk is notoriously difficult to identify. Civil conflict can cause enormous economic damage by destroying human and physical capital, so any correlations between economic conditions and conflict could be explained by reverse causality. Moreover, the type of institutional environment in which conflict occurs is likely to be the type that also depresses economic activity, raising the additional concern of omitted factors that confound the analysis.

To overcome these challenges, we study the impact of food price shocks on local conflict using panel data constructed at the level of a 0.5 x 0.5-degree subnational grid cell (roughly 55km x 55km at the equator) across the African continent. Studying conflict at this local level has several advantages over the more traditional country-level approach. Since food crops represent a higher average share of both production and consumption in Africa than in any other region, a price spike can be expected to significantly raise income for agricultural producers and reduce real income for consumers at the same time. With the help of spatial data on where specific crops are grown and consumed, we are able to separate these producer and consumer effects within countries. Moreover, we can confidently dismiss the potentially confounding concern that African civil conflict affects world cereal prices, given that the entire continent accounts for less than 6% of global production over our sample period. The recent emergence of highly detailed data on African conflict also allows us to consider the effects of price movements on different varieties of violence within countries.

We first look at the type of large-scale armed conflict that tends to be the subject of most attention among researchers. We label this “factor conflict”, as these battles typically relate to the permanent control of land. Our results identify the differences that one would expect to see between places with crop agriculture and those without. A rise in food prices of one standard deviation leads to a 17% decline in conflict in regions where food production is common and farmers benefit from higher prices, and a 9% increase in conflict in populated areas with no food production – areas where consumers are hurt by rising food prices.

This finding is consistent with the idea that opportunity costs are important drivers of violence: when food prices are high, it makes more sense for producers to harvest crops; when they are low, farmers must look for other ways to make ends meet. At the same time, high prices can push some of the poorest consumers toward joining armed conflict groups in order to maintain a living wage; a fall in prices, on the other hand, pushes their real wages up and allows them to return to the productive sector. In both cases, real income is a fundamental factor in the decision to fight.

The second type of violence we consider relates not to the control of territory but to the appropriation of output. This “output conflict”, as we call it, is more transitory, more atomistic, and less organised than factor conflict. The goal of output conflict is simply to take food, money, or other movable goods. It can appear in our dataset as looting, raiding, rioting, or interpersonal theft.

As with factor conflict, higher food prices cause an increase in output conflict in areas without crop agriculture (e.g., urban centres). This finding is consistent with the idea that declining real wages push some consumers towards appropriation in order to make ends meet. The more interesting distinction, however, comes in areas with crop agriculture. In contrast to factor conflict, we see clear evidence that output conflict increases with rising food prices in regions that produce the associated crops. What can explain this difference? Even in food-producing regions, not everyone makes a living from farming. For net consumers in these regions, higher food prices simultaneously (i) lower real income, as a given wage buys less food, and (ii) increase the value of appropriable output, as nearby farmers have assets that have appreciated in value. These forces provide incentives for consumers to engage in output conflict when prices rise.

We corroborate this finding using a large multi-country survey dataset with information on self-reported crime. Commercial farmers who grow food crops in food-producing regions are more likely to report being victims of theft and physical assault following a spike in food prices. Interestingly, farmers who instead grow cash crops such as cotton or coffee do not report being victimised following an equivalent price spike. In this case, higher prices are unlikely to have reduced real income for consumers, who tend not to purchase cash crops in order to get by.

In sum, the effect of food prices on conflict in Africa depends on both the sub-national location and the type of conflict. Global price increases lower large-scale factor conflict in agricultural areas, and increase it in urban areas. For output conflict, the effect is more straightforward: higher prices will increase the incidence of conflict in both rural and urban areas. Overall, our results provide clear evidence that much of the observed conflict in Africa has economic roots. Our approach allows us to isolate the role of changing economic conditions from other factors that might affect conflict risk (such as governance), and to show that these changes can have quantitatively large effects on different types of conflict.

Our findings suggest that policies to minimise conflict risk in the face of food-price shocks must be tailored to sub-national areas. Incentives to farm rather than fight can reduce the risk of factor conflict in rural areas when global prices are critically low. Similarly, policy makers ought to be prepared for potential instability in urban areas when global prices are critically high. Potential policy responses include guaranteed prices for producers and well-timed releases of buffer-stock food for consumers when global prices reach critical levels in either direction. A complementary approach could take the form of local “workfare” programmes—welfare conditional upon work—that shift from urban to rural regions as prices fall, and vice versa.