Summer is going too fast. It seems like just yesterday Lebron James was being a sore loser, body slamming and stepping over people – and getting rewarded for it by the NBA. Apart from that, one interesting experience this summer was getting to visit some very different maize (corn) fields within a few weeks in July. First, I was in Kenya and Uganda at some field sites, and then I was visiting some farms in Iowa.

When talking maize, it’s hard to get much different than East Africa and East Iowa. As a national average, Kenya produces a bit less than 4 million tons of maize on 2 million ha, for a yield of about 1.75 t/ha. Iowa has about seven times higher yield (12.5 t/ha), and produces nearly twenty times more maize grain. The pictures below give a sense of a typical field in each place (Kenya on the left). 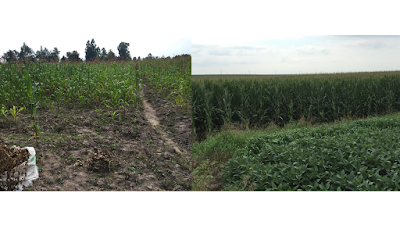 Lots of things are obviously different between the two areas. There are also some things that people might think are different but really aren’t. For example, looking at annual rainfall or summer temperatures, they are pretty similar for the two areas (figures from www.climatemps.com, note different scales): 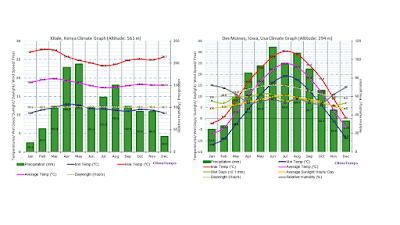 But there are also things that are less obviously different. Earlier this year I read this interesting report trying to estimate soil water holding capacity in Africa, and I’ve also been working a bunch with soil datasets in the U.S. from the USDA. Below shows the total capacity of the soil to store water in the root zone (in mm) for the two areas, plotted on the same scale. 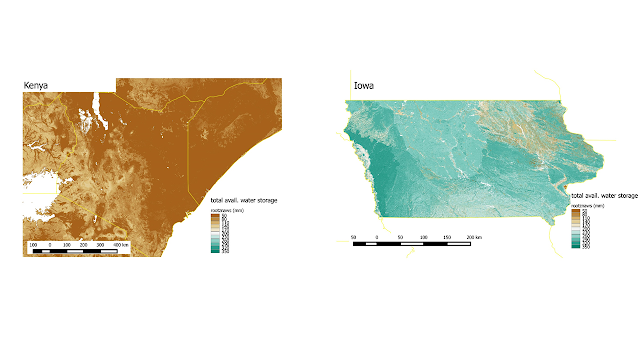 It’s common for people to talk about the “deep” soils of the Corn Belt, but I don’t think people typically realize just how much better they are at storing water than many other places. There’s virtually no overlap between the distribution of root zone storage in the two areas, and on average Kenya soils have about half the capacity of Iowa’s.

How much difference can this one factor make? As a quick thought experiment I ran some APSIM-maize simulations for a typical management and weather setup in Iowa, varying only the root zone storage capacity between 150 and 330mm. Simulated yields by year are shown below, with dashed lines showing the mean for each soil. 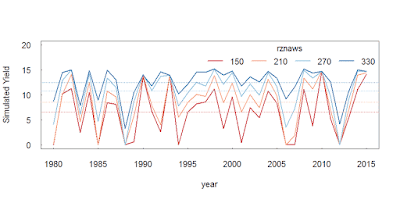 This suggests that having half the storage capacity translates to roughly half the average yields, with much bigger relative drops in hot or dry years like 1988 or 2012. And this assumes that management is identical, when a rational farmer would surely respond by applying much less inputs to the worse soils.

Just something to keep in mind when thinking about the potential for productivity growth in Africa. There’s certainly room for growth, and I saw a lot of promising trends. But just like when it comes to the NBA officials, there's a lot going on under the surface, and I wouldn’t expect too much.
Posted by David Lobell at 3:57 PM