Thanks to my thesis advisor (David) for this opportunity to write a guest post about a paper published today in Nature Climate Change by myself and my colleague at Stanford, Delavane Diaz. G-FEED readers might be familiar with a number of new empirical studies suggesting that climate change might affect not just economic output in a particular year, but the ability of the economy to grow. Two studies (here and here) find connections between higher temperatures and slower economic growth in poorer countries and Sol has a recent paper showing big effects of tropical cyclones on growth rates. Delavane and I simply take one of these empirical estimates and incorporate it into Nordhaus’ well-known DICE integrated assessment model (IAM) to see how optimal climate policy changes if growth-rates are affected by climate change.

The figure below shows why these growth effects are likely to be critical for climate policy. If a temperature shock (left) affects output, then there is a negative effect that year, but the economy rebounds the following year to produce no long-term effect. If growth rates are affected though, there is no rebound after the temperature shock and the economy is permanently smaller than it would otherwise be. So if temperature permanently increases (right), impacts to the growth rate accumulate over time to give very large impacts. 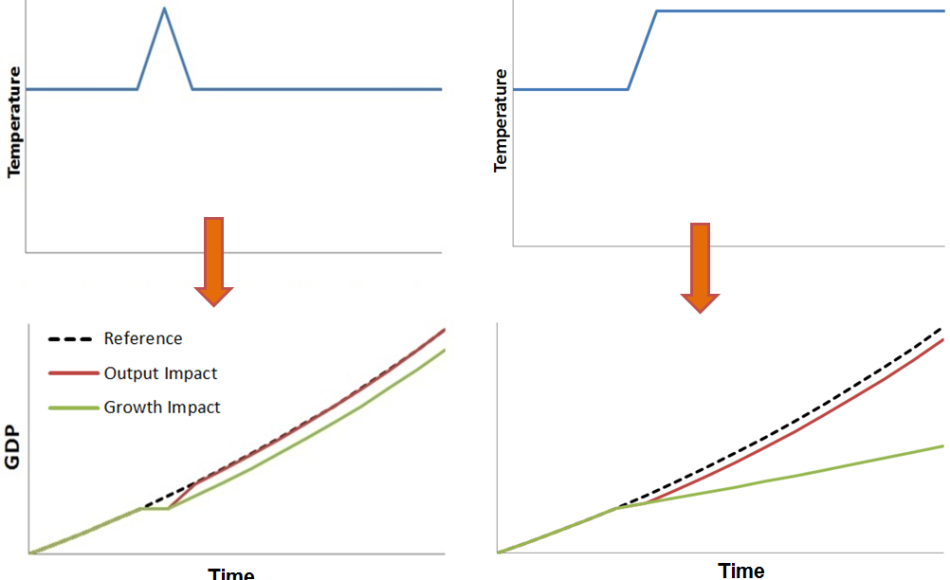 No IAMs so far have incorporated climate change impacts to economic growth. Of the three models used by the EPA to determine the social cost of carbon, two (PAGE and FUND) have completely exogenous growth rates. DICE is slightly more complicated because capital stocks are determined endogenously by the savings rate in the model. But any climate impacts on growth rates are very very small and indirect, so DICE growth rates are effectively exogenous.

We take the 2012 estimate by Dell, Jones and Olken (DJO) as our starting point and modify DICE in order to try and accurately incorporate their findings. We needed to make three major changes: firstly we split the global DICE model into two regions to represent developed and developing regions because DJO find big growth effects in poor countries but only modest effects in rich; secondly, we allowed temperature to directly affect growth rates by affecting either the growth in total factor productivity or the depreciation of capital, calibrating the model to DJO; and finally, since DJO estimates are the short-run impact of weather fluctuations, we explicitly allow for adaptation in order to get the response to long-term climate change (making some fairly optimistic assumptions about how quick and effective adaptation will be).

The headline result is given in the graph below that shows the welfare-maximizing emissions trajectory for our growth-effects model (blue) and for our two-region version of the standard DICE model (red). DICE-2R shows the classic “climate policy ramp” where mitigation is increased only very gradually, allowing emissions to peak around 2050 and warming of over 3°C by 2100. But our growth-effects model gives an optimal mitigation pathway that eliminates emissions in the very near future in order to stabilize global temperatures well below 2°C. 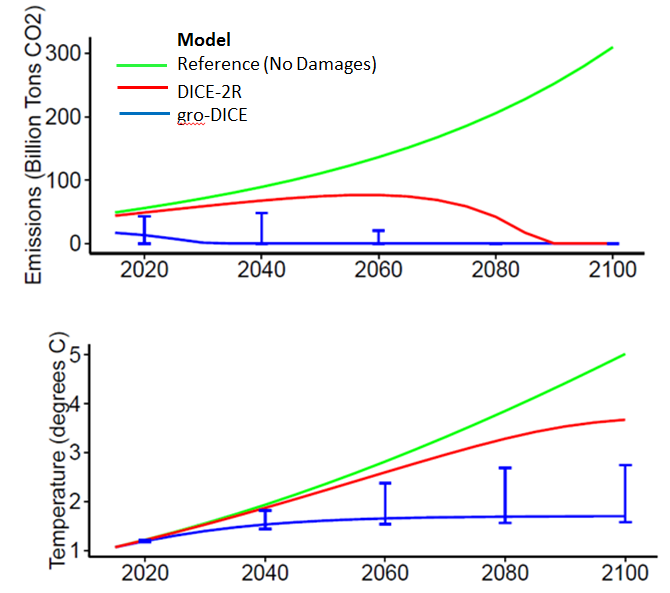 I think its worth just pointing out how difficult it is to get a model based on DICE to give a result like this. The “climate policy ramp” feature of DICE output is remarkably stable – lots of researchers have poked and prodded the various components of DICE without much result. Until now, the most widely discussed ways of getting DICE to recommend such rapid mitigation was either using a very low discount rate (a la Stern) or hypothetical, catastrophic damages at high temperatures (a la Weitzman). One of the main reasons I think our result is interesting is that it shows the climate policy ramp finding breaks down in the face of damages calibrated to empirical results at moderate temperatures, even including optimistic adaptation assumptions and standard discounting.

There are a bunch more analyses and some big caveats in the paper, but I won’t go into most of them here in the interests of space. One very important asterisk though is that the reason why poor countries are more sensitive to warming than rich countries has a critical impact on mitigation policy. If poorer countries are more vulnerable because they are poor (rather than because they are hot), then delaying mitigation to allow them time to develop could be better than rapid mitigation today. We show this question to be a big source of uncertainty and I think it’s an area where some empirical work to disentangle the effect of temperature and wealth in determining vulnerability could be pretty valuable.

I’ll just conclude with some quick thoughts that writing this paper has prompted about the connection between IAMs and the policy process. It does seem very surprising to me that these IAMs have been around for about 20 years and only now is the assumption of exogenous economic growth being questioned. Anyone with just a bit of intuition about how these models work would guess that growth-rate impacts would be hugely important (for instance, one of our reviewers called the results of this paper ‘obvious’), yet as far as I can tell the first paper to point out this sensitivity was just published in 2014 by Moyer et al.. This is not just an academic question because these models are used directly to inform the US government’s estimate of the social cost of carbon (SCC) and therefore to evaluate all kinds of climate and energy regulations. The EPA tried to capture possible uncertainties in its SCC report but didn’t include impacts to economic growth and so comes up with a distribution over the SCC that has to be too narrow: our estimate of the SCC in 2015 of $220 per ton CO2 is not only 6 times larger than the EPA’s preferred estimate of $37, but is almost twice the “worst case” estimate of $116 (based on the 95th percentile of the distribution). So clearly an important uncertainty has been missing, which seems a disservice both to climate impact science and to the policy process it seeks to inform. Hopefully that is starting to change.

So that’s the paper. Thanks again to the G-FEEDers for this opportunity and I’m happy to answer any questions in the comments or over email.
-Fran (fcmoore@stanford.edu)