Will the dry get drier, and is that the right question?

A “drought” can be defined, it seems, in a million different ways. Webster’s dictionary says it’s “a period of dryness especially when prolonged; specifically:  one that causes extensive damage to crops or prevents their successful growth.” Wikipedia tells me “Drought is an extended period when a region receives a deficiency in its water supply.” The urban dictionary has a different take.

But nearly all definitions share the concepts of dryness and of damage or deficiency. We’ve talked a lot on this blog about drought from an agricultural perspective, and in particular how droughts in agriculture can (or at least should) often be blamed as much on high temperatures and strong evaporative demand as on low rainfall. At the same time, there’s lots of interesting work going on trying to assess drought from a hydrological perspective. Like this recent summary by Trenberth et al.


The latest is a clever study by Greve et al. that tries to pin down whether and where droughts are becoming more or less common. They looked at lots of combinations of possible data sources for rainfall, evapotranspiration (ET) and potential evapotranspiration (ETp). They then chose those combinations that produced a reasonable relationship between E/P and ETp/P, defined as the Budyko curve, and used them to calculate trends in dryness for 1948-2005. The figure below shows their estimate of wet and dry areas and the different instances of wet areas getting wetter, wet getting drier, etc. The main point of their paper and media coverage was that these trends don’t follow the traditional expectation of WWDD (wet get wetter and dry get drier) – the idea that warming increases the water holding capacity of the air and thus amplifies existing patterns of rainfall. 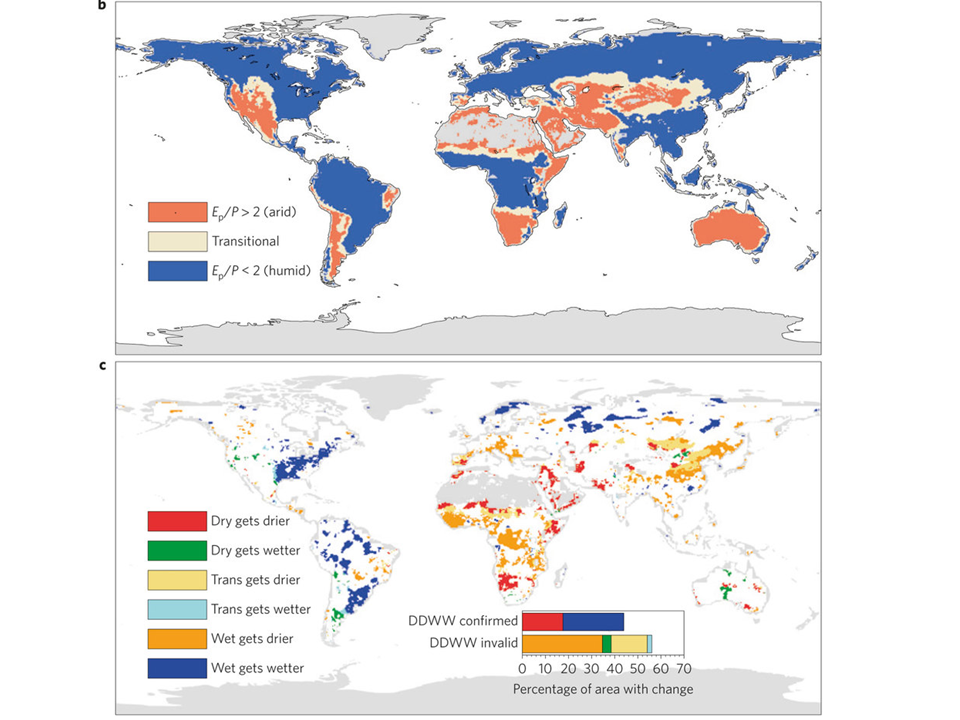 Also clear in the figure is that the biggest exception to the rule appears to be wet areas getting drier. There don’t seem to be many dry areas getting wetter over the last 50 years.

Other than highlighting their nice paper, I wanted to draw attention to something that seems to get lost in all of the back-and-forth in the community looking at trends in dryness and drought, but that I often discuss with agriculture colleagues: it’s not clear how useful any of these traditional measures of drought really are. The main concept of drought is about deficiency, but deficient relative to what? The traditional measures all use a “reference” ET, with the FAO version of penman-monteith (PM) the gold standard for most hydrologists. But it’s sometimes forgotten that PM uses an arbitrary reference vegetation of a standard grass canopy. Here’s a description from the standard FAO reference:

“To avoid problems of local calibration which would require demanding and expensive studies, a hypothetical grass reference has been selected. Difficulties with a living grass reference result from the fact that the grass variety and morphology can significantly affect the evapotranspiration rate, especially during peak water use. Large differences may exist between warm-season and cool season grass types. Cool-season grasses have a lower degree of stomatal control and hence higher rates of evapotranspiration. It may be difficult to grow cool season grasses in some arid, tropical climates. The FAO Expert Consultation on Revision of FAO Methodologies for Crop Water Requirements accepted the following unambiguous definition for the reference surface:
"A hypothetical reference crop with an assumed crop height of 0.12 m, a fixed surface resistance of 70 s m-1 and an albedo of 0.23."
The reference surface closely resembles an extensive surface of green grass of uniform height, actively growing, completely shading the ground and with adequate water."

Of course, there are reasons to have a reference that is fixed in space and time – it makes it easier to compare changes in the physical environment. But if the main concern of drought is about agricultural impacts, then you have to ask yourself how much this reference really represents a modern agricultural crop. And, more generally, how relevant is the concept of a static reference in agriculture, where the crops and practices are continually changing. It’s a bit like when Dr. Evil talks about “millions of dollars” in Austin Powers.

Here’s a quick example to illustrate the point for those of you still reading. Below is a plot I made for a recent talk that shows USDA reported corn yields for a county of Iowa where we have run crop model simulations. I then use the simulations (not shown) to define the relationship between yields and water requirements. This is a fairly tight relationship since water use and total growth are closely linked, and depends mainly on average maximum temperature. The red line then shows the maximum yield that could be expected (assuming current CO2 levels ) in a dry year, defined as the 5th percentile of historical annual rainfall. Note that for recent years, this amount of rainfall is almost always deficient and will lead to large amounts of water stress. But 50 years ago the yields were much smaller, and even a dry year provided enough water for typical crop growth (assuming not too much of it was lost to other things like runoff or soil evaporation). 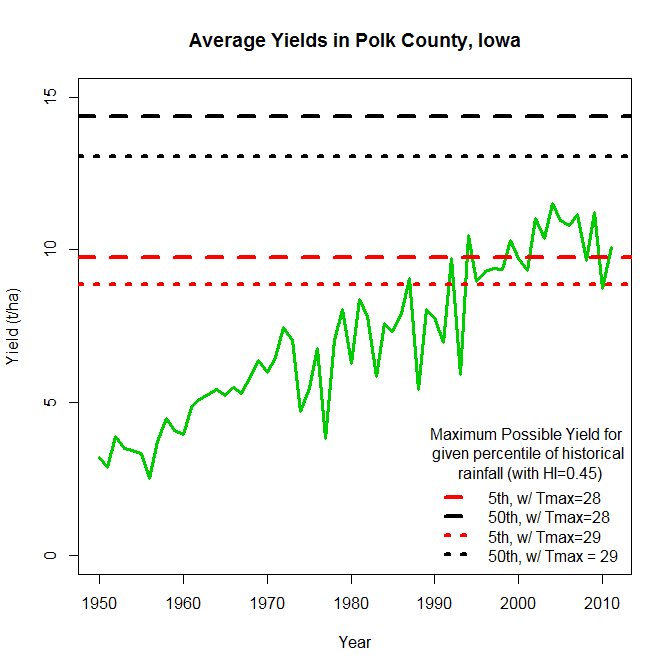 An alternative to the PM approach is to have the reference ET defined by the potential growth of the vegetation. This was described originally, also by Penman, as a “sink strength” alternative to PM, and is tested in a nice recent paper by Tom Sinclair. It would be interesting to see the community focused on trends try to account for trends in sink strength. That way they’d be looking not just at changes in the dryness part of drought, but also the deficiency part.

As someone interested in climate change, it’s nice to see continued progress on measuring trends in the physical environment. But for someone concerned about whether agriculture needs to prepare for more drought, in the sense of more water limitations to crop growth, then I think the answer in many cases is a clear yes, regardless of what’s happening to climate. As yield potential become higher and higher, the bar for what counts as "enough" water continues to rise.