Update: For the record, I'm actually not against Federal crop insurance.  Like Obamacare, I generally favor it.  But the subsidies are surely much larger than they need to be for maximum efficiency.  And I think premiums could likely be better matched to risk, and that such adjustments would be good for both taxpayers and the environment. 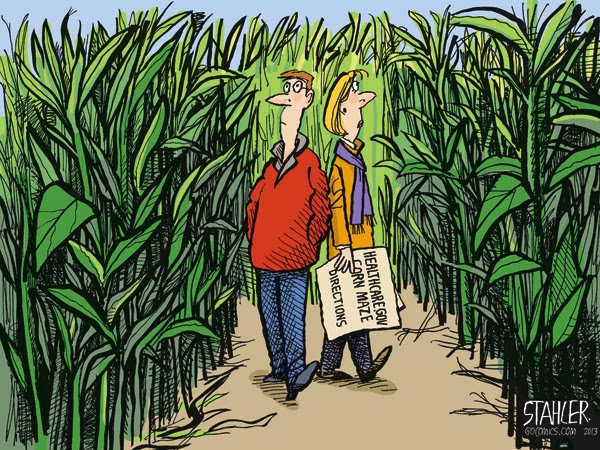 Actually, it's kind of strange to see a supposedly scandalous article in Politico in which you know almost every person mentioned.

At issue is the federal crop insurance program.  The program has been around a long time, but its scope and size--the range crops and livestock insurable under the program and the degree to which taxpayers subsidize premiums--have grown tremendously over the last 20 years.  And the latest farm bill expands the program and its subsidies to grand new heights.

For full disclosure: I used to work for USDA in the Economic Research Service and did some research on crop insurance.  Although, strangely, ties between ERS and RMA are thin to nonexistent. I've met and spoke to both Joe Glauber (USDA's Chief Economist) and Bruce Babcock (a leading professor of agricultural economics at Iowa State) a few times, and know and respect their work. And I used to work at NC State as a colleague of Barry Goodwin's.  I also went to Montana State for a master's degree way back, where I took courses from Myles Watts and Joe Attwood, who are mentioned in the article. I know Vince Smith from that time too.

Perhaps most importantly, some of my recent research uses some rich data resources that we obtained from RMA. But I have never received any monies from RMA.  Believe it or not, my interest is in the science, and despite having no vested financial interest in any of it, I have found myself in the cross hairs of agricultural interests who didn't seem to like my research findings.  Anyway, ag econ is a small, small world...

Okay, disclosures out of the way: What's the big deal here?  So ag economists work for RMA, make some nice cash, and then moonlight for the American Enterprise Institute to bash agricultural subsidies.  Yeah, there are are conflicts of interest, but it would seem that there are interests on many sides and the opportunistic ag economists in question seem willing to work for all of them.  They'll help RMA design crop insurance programs, but that doesn't mean they advocate for the programs or the level of subsidies farmers, insurance companies and program managers receive under them.  We observe the opposite.

I've got some sense of the people involved and their politics.  Most of them are pretty hard-core conservative (Babcock may be an exception, not sure), and my sense is that most are unsupportive of agricultural subsidies in general.  But none are going to turn down big pay check to try to make the program as efficient as possible.  I don't see a scandal here.  Really.

Except, I do kind of wonder why all this money is going to Illinois, Texas and Montana when folks at Columbia, Hawai'i, and Stanford could, almost surely, do a much better job for a fraction of  taxpayers' cost.  With all due respect (and requisite academic modesty--tongue in cheek), I know these guy's work, and I'm confident folks here at G-FEED could do a much better job.  I personally don't need a penny (okay, twist my arm and I'll take a month of summer salary). Just fund a few graduate students and let us use the data for good science.

Posted by Michael Roberts at 2:47 AM