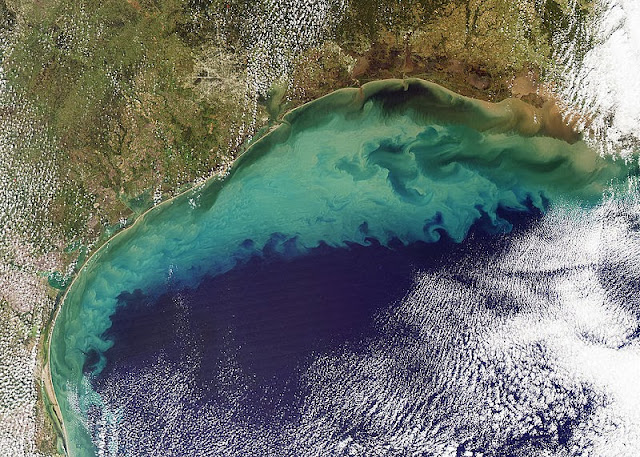 It is now fairly well documented that much of the water quality problems leading to the infamous "dead zone" in the Gulf of Mexico (pictured above) come from fertilizer applications on corn. Fertilizer on corn is probably a big part of similar challenges in the Chesapeake Bay and Great Lakes.

This is a tough problem.  The Pigouvian solution---taxing fertilizer runoff, or possibly just fertilizer---would help.  But we can't forget that fertilizer is the main source of large crop productivity gains over the last 75 years, gains that have fed the world.  It's hard to see how even a large fertilizer tax would much reduce fertilizer applications on any given acre of corn.

However, one way to boost crop yields and reduce fertilizer applications is to rotate crops. Corn-soybean rotations are most ubiquitous, as soybean fixes nitrogen in the soil which reduces need for applications on subsequent corn plantings.  Rotation also reduces pest problems.  The yield boost on both crops is remarkable.  More rotation would means less corn, and less fertilizer applied to remaining corn, at least in comparison to planting corn after corn, which still happens a fair amount.

I've got a new paper (actually, an old but newly revised), coauthored with Mike Livingston of USDA and Yue Zhang, a graduate student at NCSU, that might provide a useful take on this issue.  This paper has taken forever.  We've solved a fairly complex stochastic dynamic model that takes the variability of prices, yields and agronomic benefits of rotation into account. It's calibrated using the autoregressive properties of past prices and experimental plot data.  All of these stochastic/dynamics can matter for rotations. John Rust once told me that Bellman always thought crop rotations would be a great application for his recursive method of solving dynamic problems.

Here's the jist of what we found:

Always rotating, regardless of prices, is close to optimal, even though economically optimal planting may rotate much less frequently.  One implication is that reduced corn monoculture and fertilizer application rates might be implemented with modest incentive payments of $4 per acre or less, and quite possibly less than $1 per acre.

In the past I've been skeptical that even a high fertilizer tax could have much influence on fertilizer use. But given low-cost substitutes like rotation, perhaps it wouldn't cost as much as some think to make substantial improvements in water quality.

Nathan Hendricks and coauthors have a somewhat different approach on the same issue (also see this paper).  It's hard to compare our models, but I gather they are saying roughly similar things.

Posted by Michael Roberts at 5:26 AM