He didn't put the month's inflation numbers in longer-run context, or relative to other measures like  "core" inflation which removes food and energy.  He nevertheless concludes


So, it is clear that unless the European debt crisis again worsens and again causes a surge in demand for dollar  assets, there will be a big increase in price inflation soon. 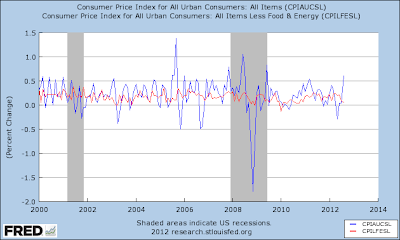 The two obvious points: (1) the monthly CPI is crazy variable; (2) the recent spike in the CPI was all energy and food; everything else declined.

Maybe, just maybe, the pattern can be explained by the drought and heat we experienced this summer, which caused some big crop losses.  I think it's safe to say monetary policy didn't have much to do with it.