Here's the annual update on weather in the US, averaged over the areas where corn is grown.  The preferred model by Michael Roberts and myself [paper] splits daily temperature into beneficial moderate heat (degree days 10-29C, or 50-84F) and harmful extreme heat (degree days above 29C, or 84F). These two variables (especially the one on extreme heat) are surprisingly powerful predictors of annual corn yields.  So how does 2015 look like? Below are the numbers through the end of July. 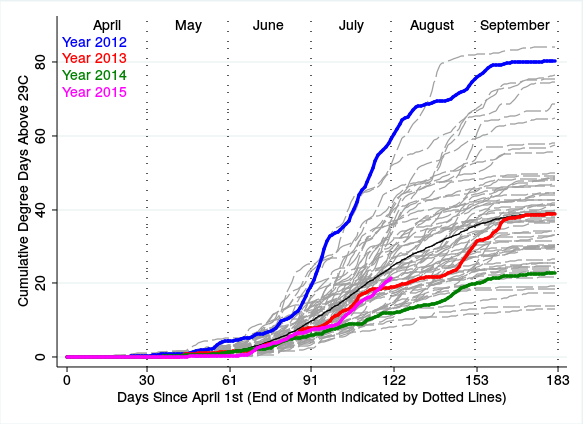 Second, beneficial moderate heat is above average. Usually the two are positively correlated (when extreme heat is above normal, so is moderate heat). Lower-than average harmful extreme heat and above-average beneficial moderate heat suggests that we should see another above-average year in terms of crop yields (Qualification: August is still outstanding and farmers planted late this year in many areas due to the cold winter, suggesting that August might be more important than usual). This is supported by the fact that corn futures have been coming down lately. 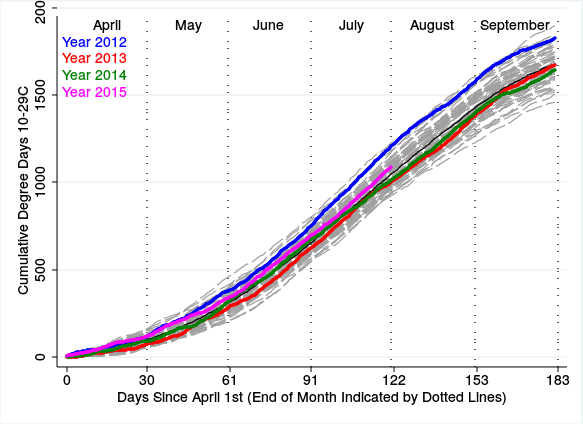 Finally, Kyle Meng and Solomon Hsiang have just pointed out to me that the very strong El Nino signal likely suggests that other parts of the global will see significant production shortfalls, so hopefully some of this can be mitigated by higher than average US yields - the power of trade.
Posted by Wolfram Schlenker at 7:37 AM