The weekend before last I attended an interesting CIMMYT meeting on remote sensing in Mexico City. Lots of cool stuff going on in remote sensing for agriculture, including use of drones in breeding programs, and near-term prospects for low-cost or free satellite data with high spatial and temporal resolution. But one of the most interesting parts of the meeting for me was catching up with Dave Hodson, a colleague who used to work in CIMMYT’s GIS group and now works full time on monitoring wheat rusts. He’s part of the Borlaug Global Rust Initiative (BGRI) which was started in the wake of the discovery of the UG99 strain of stem rust in 1999.

A quick review: rusts are a nightmare for wheat growers or breeders. They can decimate a wheat crop and can spread incredibly quickly and far. There are three main types of rust: stem rust, yellow (or stripe) rust, and leaf rust. One of the main precursors of the Green Revolution was improving rust resistance of wheat varieties, part of Norman Borlaug’s claim to fame. Breeders must continually make sure their varieties are not too susceptible to rust, and since rusts evolve over time it is often a race just to avoid going backward. That’s why it is often called Red Queen breeding, named after the scene in Throughthe Looking Glass where Alice learns she has to run just to stand still.

The same rust resistance genes were successful for a very long time, until the UG99 strain came along and proved to be a major problem for nearly all widely grown varieties. In stepped scores of wheat scientists, who quickly developed new resistant varieties that have since been widely adopted. With the help of Borlaug, and the Gates Foundation, the BGRI was set up to maintain an internationally coordinated system to monitor and respond to any future rust outbreaks.

Ok, now to the interesting part. A few weeks ago, surveyors in Ethiopia uncovered a sizable amount of wheat area (~10,000 ha) that had been wiped out by stem rust. These varieties were resistant to the known UG99 strains, so it seems that a new strain has emerged. It’s too early to know what this will imply, but an update was posted today on their website, including the picture of an affected field below. 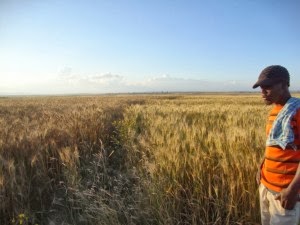 As scary as rust is, the news isn’t all bad. The systems put in place by BGRI have already had several successes, though avoiding something bad happening rarely makes the news. For example, a few years ago, in late 2010, there was a big outbreak of yellow rust in Ethiopia. Roughly a third of the entire wheat crop was lost. This year, there were conditions favorable for yellow rust, and heavy incidence was spotted. But it was spotted early, and fungicides were used to contain the outbreak, and impacts were very small. (Why rusts seem to be happening more often is a topic of debate, and some would blame climate change, but that's a topic for another day).

As this new strain of UG99 emerges, you can see the capacity of BGRI and its partners spring to action. Samples of the spores have already been sent to labs around the world to assess what exactly they are dealing with. Fungicides are being targeted to the areas with active outbreaks. Modelers are looking at potential areas where the spores could spread in the near term, as shown in the figure below from their update. (Now is sowing time throughout much of the Middle East and West and South Asia, so spores reaching there could have big impacts). And breeders will likely soon be sending lines to Ethiopia for screening. 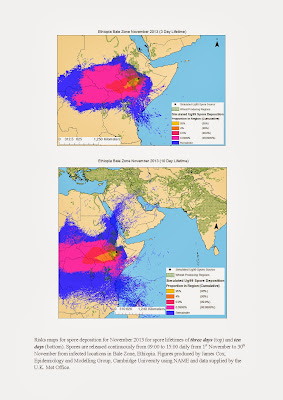 To me this is a reminder of both how many things can go wrong when trying to produce food, but also how so many hard working, smart people help to bring resilience to modern agriculture. The next time you hear someone talking about “resilience” of agriculture as if it were solely the result of what particular mix of crops or soil biota are in a particular field, you should think about people like Dave Hodson and his colleagues. The resilience of modern agriculture, for better or worse, rests on the tireless but rarely celebrated work of people like them.
Posted by David Lobell at 9:33 AM