In one of the most emailed NYTimes articles from last week, it was reported that there are now more software engineers in the US (about a million) than there are farmers.  A follow-up article on the "Silicon Prairie" suggests that a growing percentage of these software jobs are, ahem, cropping up in farming strongholds like Iowa and Kansas.

The articles point out that while building iPhone apps nobody wants isn't particularly lucrative, building apps that people do want can be (e.g. the guys who thought to launch birds at pigs pulled in over $100 million in revenue in 2011).  And on the whole, getting a job as a software engineer appears to pay pretty well, at least judging by what private shuttle bus access to Silicon Valley has done to rents in the Mission neighborhood in SF where I live.

This transformation from agriculture to apps is what economists call the "structural transformation" of economies, in which they metamorphose from poorer, rural, and agrarian societies to societies that are rich(er), more urbanized, and more devoted to industry and services.  You start out with everyone poor and farming, and you end with everyone wealthy and making apps for each other.

Understanding why and how this transition occurs is a central (and old) question in development economics, and one that remains crucial for economic policy in the developing world.  A key debate is to what extent improvements in agricultural productivity help contribute to broader economic development.  That is, do poor countries undergo the structural transformation because they have improved the productivity of their (majority) rural population, or do they undergo it because they have focused their attention and investments on other, seemingly more modern sectors?

Agricultural development and economic growth are clearly related. Below are some plots for African countries (left) and all countries (right) over the period 1961-2008 using annual data from the World Bank, with overall GDP growth on the y-axis and agricultural growth on the x-axis.  On one level this relationship is mechanical:  in countries where agriculture makes up a large percentage of total output, it has to be the case that growth in agricultural productivity increases overall output and makes people better off.  But because agriculture is a relatively small share of total output in most countries outside of Africa, and the relationship is still relatively strong and highly significant using all countries in the world (right plot), there is probably something more interesting going on.  But which way does the causal arrow go?  Does an improving economy lead to agricultural growth, or is agriculture itself an important engine of that growth? 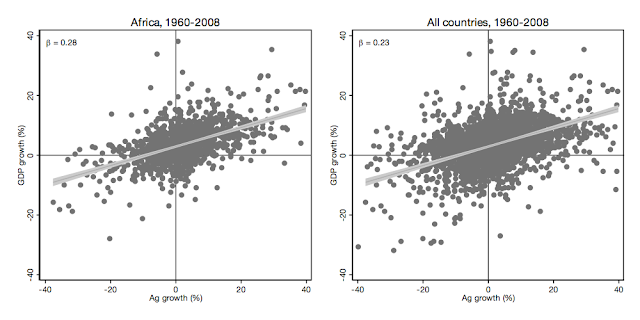 A couple recent papers try to shed some causal relationship between agricultural development and broader economic performance.  The basic empirical approach is familiar:  find something that shifts around agricultural productivity in a plausibly random way, and see what this implies for economic performance outside agriculture.  Finding that magical "exogenous" shifter is where the cleverness come in.

In a new working paper, Hornbeck and Keskin study what happens when changes in technology (better pumps) suddenly allowed farmers in parts of the US Great Plains to tap the Ogallala Aquifer for irrigation.  They show that access to the Ogallala greatly increased agricultural productivity in the counties where it could be accessed, and they then compare how the non-agricultural economy performed in these counties to its performance in nearby counties that were otherwise the same but that could not access the Aquifer.  They show that agricultural productivity gains do not seem to have helped the long-run performance of either industry or services in these counties.

Hornbeck and Keskin conclude that "a large windfall gain in the agricultural sector does not appear to have encouraged broader economic development of the local non-agricultural economy", and that "public support of the agricultural sector does not appear to generate positive economic spillovers that might justify its distortionary impacts."  Citing other work by Hornbeck and co-authors , they note that the opening of large manufacturing plants in the US appeared to have much larger local spillovers.

Call this support for the "apps not agriculture" view:  if you want to improve outcomes, invest in something besides agriculture.  You hear this a lot.  Here, for instance, is econo-celebrity blogger Chris Blattman a couple weeks ago: "Helping poor women set up a market stall, or small farmers double their profits, is a good and noble goal.... But it is a humanitarian strategy, not a growth strategy. Real economic change will wait for industry."

So, apps not agriculture?  A paper by Nunn and Qian published last year in the QJE, a top econ journal, paints a very different picture.  They study what happened when European sailors brought potatoes back from the Americas to the "Old World" (i.e. Eastern Hemisphere) beginning in the 1500 and 1600s.  They show that relative to what was being grown in much of the Old World at the time, growing potatoes offered a remarkable bang for the buck in terms of both calories and vitamins.  Their empirical approach, similar to Hornbeck and Keskin, compares how outcomes evolved in Old World areas that were able to adopt the potato to how they evolved in nearby areas that were not suitable to potato cultivation.

Which view is correct? And what explains the difference between the findings in these two papers? It seems to me that the Hornbeck and Keskin finding describes an economic setting (post WWII United States) that is very different from many rural agricultural settings of today's poor countries:  trade and capital markets in the US were/are fairly well integrated, which would limit local demand spillovers (just buy that widget you want off Amazon) and limit the need for capital to come from local sources (borrow from Chase instead of your buddy down the street).

The setting in Nunn and Qian is perhaps more relevant for many of today's developing countries -- and in fact includes a lot of them -- but much of their data and anecdotes are from Europe and so the implications for, say, Africa are not automatic.  Some equally rigorous studies on modern developing countries are going to be key for understanding how we get from agriculture to apps  -- in particular, in understanding whether the insights from papers like Nunn and Qian hold for an increasingly globalized world.  As in the two papers above, this is going to require some serious cleverness in identifying exogenous shifters of longer-term agricultural productivity.

(Concluding sidenote:  much like March Madness, apps can have their own decidedly negative economic spillovers...)
Posted by Marshall Burke at 3:12 PM